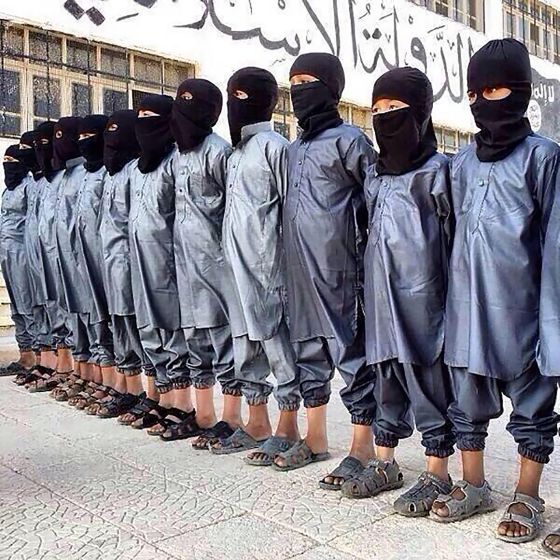 The Wall Street Journal reports: Jomah, a 17-year-old Syrian who joined Islamic State last year, sat in a circle of trainees for a lesson in beheading, a course taught to boys as young as 8.

Teachers brought in three frightened Syrian soldiers, who were jeered and forced to their knees. “It was like learning to chop an onion,” Jomah said. “You grab him by the forehead and then slowly slice across the neck.”

A teacher asked for volunteers and said, “Those who behead the infidels will receive gifts from God,” recalled Jomah, who didn’t want his full name revealed. The youngest boys shot up their hands and several were chosen to participate. Afterward, the teachers ordered the students to pass around the severed heads.

“I’d become desensitized by that time,” said Jomah, who has since defected to Turkey with his family. “The beheading videos they’d shown us helped.”

The enrollment of hundreds of boys in such militant training camps is another tragic facet of Syria’s nearly four-year-long civil war — and its impact could trouble the Middle East for years to come. Parents worry their boys will be forever lost to the indoctrination of Islamic State. [Continue reading…]

A TSG IntelBrief concludes:
• Through systemic indoctrination, intimidation, and extermination, violent extremist groups such as the Islamic State, Boko Haram, and both Afghan and Pakistan Taliban, are targeting children with unprecedented ferocity

• Extremists are trying to steal the future away from vulnerable regions by stealing the future generation through relentless messaging and violence that separates the youth from their society, government, and culture

• The damage already done by the Syrian civil war, the Islamic State, Boko Haram, and violent extremist groups in in Pakistan pales in comparison to what is yet to come if even a small percentage of their focus on youth pays off.

In the midst of pervasive war-weariness and deeply felt opposition to military intervention following the war in Iraq, social media has not only desensitized children living under ISIS’s rule, serving as a primer on brutality, but it has also desensitized opponents of war.

Images which provoke instinctive revulsion, trigger a desire not only to look away, but also turn away in every way possible, such that both ISIS and those who have become its victims can be cloaked in otherness.

When we see children in masks, it’s easier to see the masks than see the children.

Paradoxically, among the many who readily acknowledge that ISIS came into existence primarily as a result of the war in Iraq and that in this sense, ISIS is an American creation, far fewer are willing to admit that the U.S. has a huge responsibility in now trying to thwart the monster that it unwittingly released.

At the same time, even if we acknowledge that we are part-owners of the problem, no one will be served well by casting America in its traditional self-ascribed role as rescuer.

Now, as has long been the case, the U.S. needs to break out of its bipolar relationship with the rest of the world, neither seeking to dominate, nor retreat.