If Glenn Greenwald had more interest in investigation and less interest in being a celebrity, he could find no better tutor than Steven Aftergood — someone who most of Greenwald’s followers have most likely never heard of. Even so, Greenwald certainly understand what plays well with a large audience: a simple story.

Aftergood writes: For some of Edward Snowden’s partisans and supporters…, the possibility that his leaks had negative as well as positive consequences involves more complexity than they can tolerate. If Snowden intended to defend constitutional values, as he insists, then how dare anyone suggest that he may have also aided America’s enemies, even indirectly?

This sort of complexity does not arise in Laura Poitras’s award-winning film Citizenfour about Snowden, as its few critical reviewers have noted.

Many of the documents Snowden disclosed “go far beyond exposures of spying on Americans,” wrote Fred Kaplan in a review of the film in Slate. “If Snowden and company wanted to take down an intelligence agency, they should say so. But that has nothing to do with whistleblowing or constitutional rights.”

Likewise, wrote George Packer in The New Yorker, “Among the leaked documents are details of foreign-intelligence gathering that do not fall under the heading of unlawful threats to American democracy–what Snowden described as his only concern. [Former NSA official William] Binney, generally a fervent Snowden supporter, told USA Today that Snowden’s references to ‘hacking into China’ went too far: ‘So he is transitioning from whistle-blower to a traitor’.”

And from Michael Cohen in The Daily Beast: “What is left out of Poitras’s highly sympathetic portrayal of Snowden is so much of what we still don’t know about him. For example, why did he steal so many documents that have nothing to do with domestic surveillance but rather overseas–and legal–intelligence-gathering operations?”

But for a discussion of Citizenfour that presents no such dissonant, skeptical notes or troublesome opposing views, see the late David Carr’s final interview with Snowden, Poitras and Glenn Greenwald.

For me, one of the most memorable moments in that interview came when the participants scoffed at the United State’s poor ranking in the latest Borders Without Borders World Press Freedom Index.

At 46, the U.S. falls below countries such as Botswana — proximity which for Greenwald appeared to insult America’s reputation much more than it complimented Botswana.

While enjoying the freedom to speak from a stage in New York City (Greenwald’s fear of getting arrested in the U.S. seemed to disappear as soon as he got a Pulitzer and published his book), no mention was made of the fact that the country where Snowden resides ranks 148, while Greenwald’s home country of Brazil ranks 111.

No doubt, for as long as the U.S. retains the conceit of being “the leader of the free world,” it has little excuse for failing to rank number one in press freedom. At the same time, those who choose to characterize the U.S. government as the preeminent threat to personal freedom in the world, are either willfully ignoring or simply ignorant of much more egregious threats to freedom that can be seen in China, the Middle East, Russia and elsewhere. 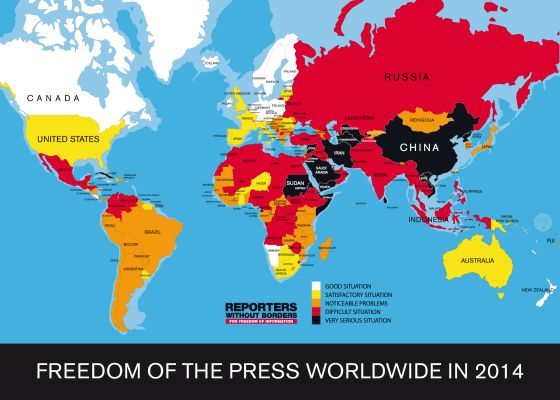