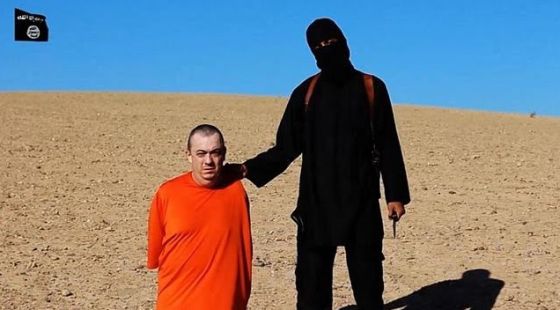 The Washington Post reports: The world knows him as “Jihadi John,” the masked man with a British accent who has beheaded several hostages held by the Islamic State and who taunts audiences in videos circulated widely online.

But his real name, according to friends and others familiar with his case, is Mohammed Emwazi, a Briton from a well-to-do family who grew up in West London and graduated from college with a degree in computer programming. He is believed to have traveled to Syria around 2012 and to have later joined the Islamic State, the group whose barbarity he has come to symbolize.

“I have no doubt that Mohammed is Jihadi John,” said one of Emwazi’s close friends who identified him in an interview with The Washington Post. “He was like a brother to me. . . . I am sure it is him.”

A representative of a British human rights group who had been in contact with Emwazi before he left for Syria also said he believed Emwazi was Jihadi John, a moniker given to him by some of the hostages he once held.

“There was an extremely strong resemblance,” Asim Qureshi, research director at the rights group, CAGE, said after watching one of the videos. “This is making me feel fairly certain that this is the same person.” [Continue reading…]

Qureshi, in a statement on the CAGE website, portrays Emwazi as a victim of British counter-terrorism policies:

This case should trigger thinking about British domestic and foreign policy. What risk assessments, if any, have been made about British counter-terrorism policy and the key part it plays in radicalising individuals? How have the security services been allowed to get away with abusing British citizens without redress? Why are the long-standing grievances over Western interventions in the Muslim world been ignored?

Propagandists have a habit of becoming the most devout believers in their own narrative, but I think it requires a particularly distorted mindset to portray Emwazi, given his alleged actions, as a victim.

In a press conference today, Qureshi described Emwazi as a “kind” and “gentle” young man.

In a video released today, Qureshi says: “The questions shouldn’t be about Jihadi John but they should be about what role our security services have played in alienating people in this society and turning them away from being able to find solutions to the problems they have.”

Moazzam Begg, CAGE’s director of outreach and a former detainee at Guantánamo, can also reasonably argue that he has been a victim of Britain’s counter-terrorism policy and what some see as its over-zealous security services.

Given Qureshi’s reasoning, are we to imagine that Begg or anyone else finding themselves in a similar position might be just as likely to follow in Emwazi’s footsteps and become another of ISIS’s executioners?

In fact, Begg has no illusions about ISIS: “You have no idea how dangerous these people are,” he wrote on Facebook in early 2014.

“I saw muhajireen (foreigners), locked in cages, by Allah worse, than my Guantanamo cell.

“They beat people to make them confess…just like the Arab regimes, there is no difference.

“I have been to many places, Bosnia, Afghan… but never seen this kind of fitnah [turmoil] and such dangerous extremism and readiness for takfeer [excommunication].

“Syrians on the ground have started to hate foreigners because of them.

“ISIS have even detained and killed aid workers…brothers from UK who have taken convoys [have] been looted by ISIS, guns shoved in faces of brothers who have crossed Europe to bring aid.

“And what’s the basis of detaining the non-Muslim aid worker [Alan Henning] who came in as a guest of Muslims, under their protection? They’ve probably murdered him too, just like many Muslims they’ve done that to.”

The world is full of people who for multitudes of justifiable reasons regard themselves as victims, yet this doesn’t absolve them of responsibility for their own actions.

The Guardian adds: “Jihadi John” is one of a trio of Britons who held hostage Spanish, French, Danish, British and US nationals. The hostages were captured in northern Syria, some in Idlib province, others in Aleppo and a third group in and around Raqqa province, which has since become the main Syrian stronghold of Isis.

The jihadi cell that spawned Isis was initially strong in Idlib province, having taken root there in the summer of 2012. From there it spread to Aleppo, where hostages that had been captured at that point were held in one of two locations – under the eye hospital in the centre of the city or in a factory deep in an industrial zone on its northern outskirts.

By February last year, all the hostages, including Briton John Cantlie, who is one of two remaining western hostages, were moved to Raqqa.

It was in Raqqa that the hostages first became aware of the status that Emwazi had developed among Isis. One former hostage described him as “cold, sadistic and merciless”.