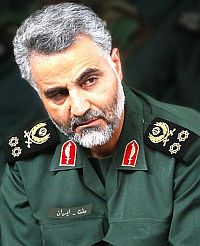 Mahan Abedin writes: His photos are everywhere in the Iranian media and his name is mentioned on a daily basis by the national broadcaster. Major General Qasem Soleimani, the commander of the Quds force of the Islamic Revolutionary Guards Corps (IRGC), is officially a national hero.

This extreme publicity is all the more surprising in view of Soleimai’s command of the most secretive and sensitive branch of the IRGC. The Quds force is the expeditionary wing of the Revolutionary Guards and spearheads Iran’s engagement with pro-Iranian armies, militias and political factions across the region.

To the outside world, in particular to Iran’s enemies and opponents in the region and beyond, Soleimani is the potent face of Iran’s political and ideological offensive in the Middle East.

This portrait of Soleimani is being increasingly adopted at home as well, fed by a daily diet of the Quds force commander’s exploits on the Iraqi battlefield, most recently in the offensive to re-take Tirkrit from the so-called Islamic State.

Whilst Soleimani’s leading role in Iran’s counter-insurgency efforts in Iraq and Syria is undoubtedly pivotal to the Islamic Republic’s regional policy, there are huge questions marks regarding the extreme publicity that now surrounds him.

One plausible explanation is that Soleimani’s adoption as a national hero heralds a change of political culture in Iran with significant long-term ramifications for the country’s domestic and foreign policy.

Qasem Soleimani’s transformation from a secretive commander to national celebrity is unprecedented in modern Iranian culture, and his enormous popularity notwithstanding, it is not entirely without controversy. [Continue reading…]