The Washington Post reports: A massive portrait of a middle-aged man towers over the Ferris wheel and giant mushrooms at an amusement park here. At night, the image is bathed in an ethereal light, visible from a quarter-mile away.

His admirers call him “Ustad,” or “Teacher.” His critics call him the King. 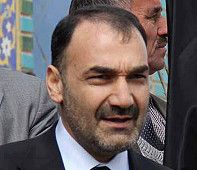 For more than a decade, Atta Mohammad Noor, governor of Balkh province, has controlled this northern region with an iron hand, imbued with the authority of the freedom fighter he was and the ultra-rich businessman he has become. Guns, militias and guile, as well as his ability to provide security, have made him one of the country’s most formidable strongmen.

To many war-weary Afghans, former warlords such as Noor — who are accused of human rights abuses yet rule with impunity — have to be marginalized for the nation to move into a new era. To their supporters, these former warlords remain a bulwark against the Taliban, al-Qaeda and, possibly, the Islamic State, more vital than ever as the U.S. military mission edges to a close.

“If Ustad Atta is ever replaced as governor, there will be chaos here, and it will spread to other provinces,” declared Haji Abdul Wahab, a close friend who manages the park, which Noor built. “He’s got a special place in the hearts of Afghan people.”

Noor’s rise and endurance is a legacy of America’s longest war and an emblem of a fresh contest for influence. It pits the aspirations of Western-educated technocrats keen to transform Afghanistan against conservative ethnic and tribal strongmen determined to preserve the status quo. That struggle is becoming the definitive battle for the future of every aspect of the country’s affairs — from forming a new cabinet to tackling rampant corruption to engaging in peace talks with the Taliban. [Continue reading…]