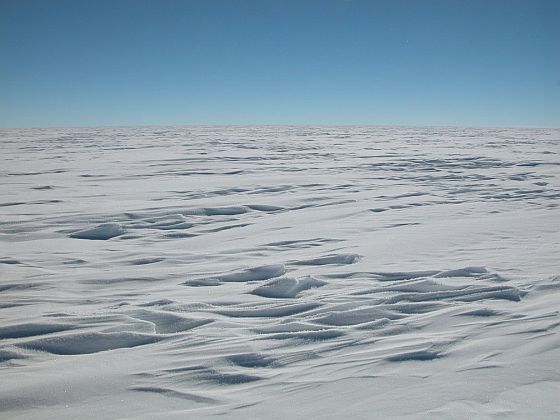 Stephen J Pyne writes: I had not intended to go to the end of nowhere. Even by Antarctic standards, Dome C was the back of beyond. But one afternoon, while fumbling with gear in a McMurdo warehouse, I overheard an allusion to ‘the source regions’. The technicians used the term casually, discussing what goods would be shipped to a remote camp well over the Transantarctic Mountains. But in my mind the phrase sparked an epiphany of symbolism. The source regions. Here was the geographic place at which the East Antarctic ice sheets gathered and then flowed outward. Here was a place that took nothing from elsewhere save fugitive water vapour and turned it into Ice. I had come here to understand Antarctica, by whatever means I could. Surely that quest demanded a journey to the source, for it must certainly contain the essence of the Ice. So after a trip to the National Science Foundation chalet where I pleaded my case, and then a layover at the Pole, adapting to high elevation, I stepped off an LC-130 (‘The Antarctic Queen’) on a dazzling 1981 New Year’s Eve at Dome C and found myself at the end of the world.

Antarctica is a place only an intellectual could love. The further one moves into the interior, away from the coast and storms and marine life that tenuously valence with the Earth, the more dominant the ice and the more extraterrestrial the surroundings. The commonsense perspective of ordinary people is that there is ‘nothing there’, and they are almost right. Even scientists in keen pursuit of data, precious by being rare — our age’s equivalent to the spice and bullion that inflamed early explorers — find Dome C extreme. The rumour soon spread on site, originating from a knot of geophysics graduate students from Wisconsin, that we were not in Antarctica at all but had been secretly drugged on the plane and taken to a prison camp in Minnesota.

Consider the geographic facts: Dome C is an infinitesimal rise in the East Antarctic plateau, atop 14,500 foot of ice that extends outward hundreds of miles. There is little else. This is the most singular environment on Earth, a synthesis of the huge with the simple. Space and time dissolve. The cycle of days and those of seasons collapse into a single spiral. The energy budget is always negative; none during the dark season, reflected away during the light. There is no life. There is nothing to live on. Here is Dante’s imagined innermost circle of hell as an inferno of ice. Here is the Earth’s underworld.

It is a scene of absences and abstractions. There are no mountains, valleys, rivers, shores; no forests, prairies, tide pools, corn and cotton fields, sun-baked deserts; no hurricanes, no floods, no earthquakes, no fires. The only contrast is between an ice-massed land and an ice-saturated sky. The descending ice that links them — the ultimate source of the dome — has the purity of triple-distilled water. Yet it too, as with everything else, simplifies into its most primordial elements, as snowflakes crumble and fall as an icy dust. There is no centre and no edge. There is no near or far; no east or west; no real here or there. Words, too, shrink and freeze, as language and ideas shrivel into monosyllables: ice, snow, dark, sky, blue, star, cloud, white, wind, moon, light, flake, cold. [Continue reading…]