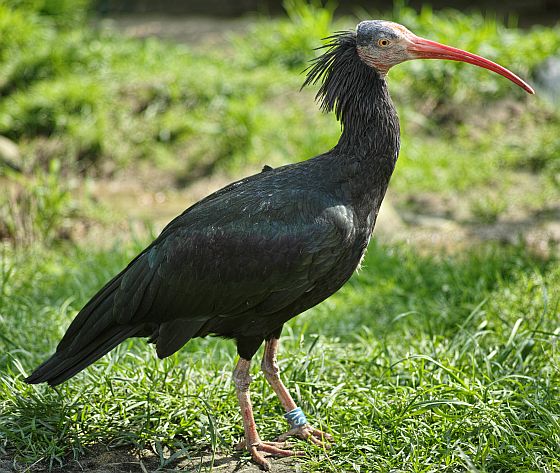 Gianluca Serra writes: A few days ago the BBC reported that the capture of Palmyra by Islamic State (IS) threatens to propel the oriental population of Northern Bald Ibis (Geronticus eremita) into extinction. Sadly they are wrong – because sadly this iconic and unique population already went extinct in Syria a few months ago.

The Northern Bald Ibis vanished from the wild as a breeding species due to known threats along the migratory route, including hunting and habitat degradation. One of our tagged birds, named Julia, was shot in northern Saudi Arabia in 2009.

Three birds, including Zenobia, had been observed at the wintering site in Ethiopia during winter 2013-14, but only she came back to Palmyra in spring 2014, alone for the second year in a row. That made 2014 the last year she was seen at the Palmyra breeding site.

So this year, for the first time in millennia the Bedouin nomads of the Palmyra desert saw no Northern Bald Ibis in late February, at the beginning of the spring, as I was informed by my contacts in Palmyra. The bearded and black-clothed extremists were only the unaware funereal witnesses of the ibis’s absence. [Continue reading…]