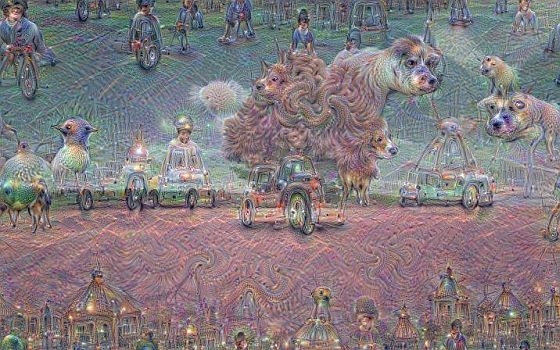 Quartz reports: American sci-fi novelist Philip K. Dick once famously asked, Do Androids Dream of Electric Sheep? While he was on the right track, the answer appears to be, no, they don’t. They dream of dog-headed knights atop horses, of camel-birds and pig-snails, and of Dali-esque mutated landscapes.

Google’s image recognition software, which can detect, analyze, and even auto-caption images, uses artificial neural networks to simulate the human brain. In a process they’re calling “inceptionism,” Google engineers sought out to see what these artificial networks “dream” of — what, if anything, do they see in a nondescript image of clouds, for instance? What does a fake brain that’s trained to detect images of dogs see when it’s shown a picture of a knight?

Google trains the software by feeding it millions of images, eventually teaching it to recognize specific objects within a picture. When it’s fed an image, it is asked to emphasize the object in the image that it recognizes. The network is made up of layers — the higher the layer, the more precise the interpretation. Eventually, in the final output layer, the network makes a “decision” as to what’s in the image.

But the networks aren’t restricted to only identifying images. Their training allows them to generate images as well. [Continue reading…]