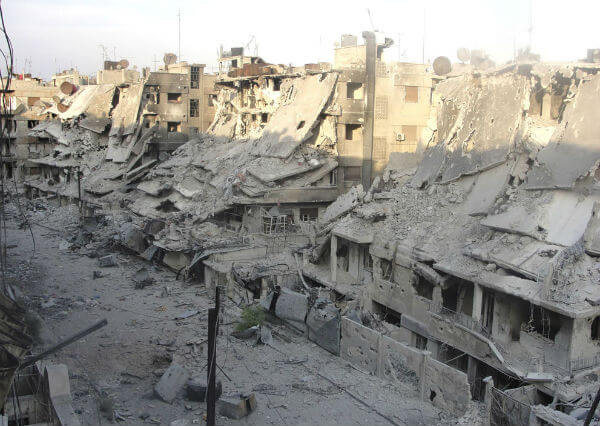 Thanassis Cambanis writes: More than four years of relentless shelling and shooting have ravaged beyond recognition this city, which once served as the symbolic capital of the revolution.

The buildings hang in tatters, concrete floors collapsed like sandcastles, twisted reinforced metal bars and window frames creaking in the wind like weather vanes. The only humans are occasional military guards, huddling in the foundations of stripped buildings. Deep trenches have been dug in thoroughfares to expose rebel tunnels. Everywhere the guts of buildings and homes face the street, their private contents slowly melting in the elements. Ten-foot weeds have erupted through the concrete.

As far as the government of Syria is concerned, the war in Homs is over. Rebel factions were defeated more than a year ago in the Old City, and the last holdouts, who carried on the revolt from the suburb of al-Waer, signed a cease-fire agreement this month. A few weeks before Christmas, busloads of fighters quit al-Waer for rebel-held villages to the north, under what the Syrian government and the United Nations hailed as a breakthrough cease-fire agreement to bring peace to one of the Syrian war’s most symbolic battlefields.

Gov. Talal al-Barazi, an energetic Assad-supporting Sunni, has been instrumental in pushing the cease-fires in Homs’s Old City and recently in al-Waer district. But almost none of the pro-uprising Sunnis who once filled its center have returned, and at times he seems to be presiding over a graveyard — an epic ruin destined to join Hiroshima, Dresden, and Stalingrad in the historical lexicon of siege and destruction.

By the end of a two-year siege of the Old City, the entire population of about 200,000 had fled, and more than 70 percent of the buildings in the area were destroyed. Today, according to the Syrian government, less than one-third of those who left have returned to the Homs area — but the ravaged city center is largely uninhabitable. Barazi said the cost of physically rebuilding the city would be enormous; without help from Russia, Iran, China, and other international donors, he said, full reconstruction would be impossible. Experts estimate it will cost upwards of $200 billion to rebuild across the entire country, or three times the country’s pre-war GDP.

And yet the Syrian government hopes to turn this shattered city into a symbol of its resurgent fortunes. Authorities showcase the reconstruction of Homs to spread a clear message: They intend to regain full control of the country. If they can tame Homs, a Sunni city where the majority of people actively embraced the revolt, they can do it anywhere.

There’s another more menacing message in the Homs settlement, however, as the neighborhoods that wholeheartedly sided with the revolution were entirely destroyed and have been left to collapse after the government’s victory. Almost no Sunnis have been allowed to return. Displaced supporters of the revolt from Homs understand that this is the regime’s second wave of punishment — they might never be allowed to go home. [Continue reading…]