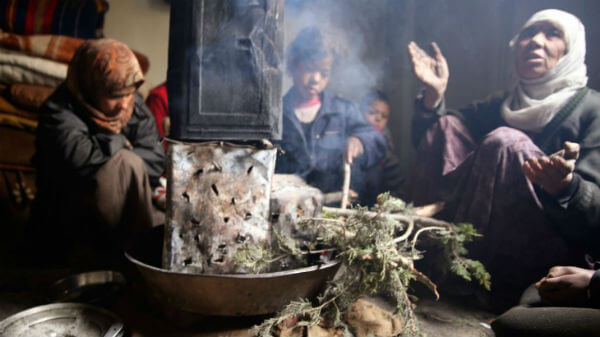 The New York Times reports: In the hills near the Lebanese border, an hour’s drive from downtown Damascus, much of a Syrian town is starving, according to residents and international humanitarian workers.

The town, Madaya, is controlled by rebels and encircled by pro-government forces with barbed wire, land mines and snipers. People there make soups of grass, spices and olive leaves. They eat donkeys and cats. They arrive, collapsing, at a clinic that offers little but rehydration salts. Neighbors fail to recognize neighbors in the streets because their faces are so sunken.

Syria, once classified as a middle-income country, now reports periodic malnutrition deaths. At least 28 people, including six babies, have died from hunger-related causes at a clinic in Madaya aided by Doctors Without Borders, medics there say. And the 42,000 people that the United Nations counts as trapped in Madaya are about a tenth of those stranded in besieged or hard-to-reach areas as conditions grow steadily worse.

Their plight represents a stark failure of international powers that has worsened even as they intensify military and diplomatic activities, all in the name of resolving the conflict.

This is happening as the United Nations plans a new round of peace talks for Jan. 25. It is happening amid escalating military interventions by Russia and the United States. And in some ways, according to diplomats and humanitarian workers, it is happening not just despite those efforts, but also because of them, as the warring parties flout international law while being courted for negotiations.

Yet in Madaya and neighboring Zabadani, once popular mountain resorts, thoughts of political change have receded in the face of hunger. Hamoudi, 27, a business-school graduate who took up arms after the government’s crackdown on protests in 2011, said many people would surrender in order to eat, even though they expected arrests and retribution to follow.

“In the revolution I was dreaming of democracy, freedom,” Hamoudi said slowly in an interview via Skype, exhaustion evident in his voice. “Today all my dreams are food. I want to eat. I don’t want to die from starvation.” [Continue reading…]