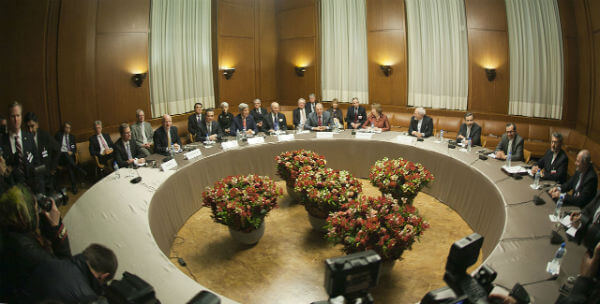 Last July, after the Joint Comprehensive Plan of Action agreement on Iran’s nuclear program had been reached in Vienna, Shadi Hamid wrote: It was clear from the start of the uprising [in Syria] that Obama did, in fact, have a clear objective – minimizing U.S. involvement as much as possible. But there are other places, such as Iraq, where the Obama administration was pulled back in despite (or, more likely, because of) its best efforts. The unwillingness to rethink Syria strategy in any serious way has been reinforced by the momentum of the Iran negotiations. Why rock the boat and potentially provoke a major international incident, when progress was being made on Iran’s nuclear program? Why even take the chance with so much at stake? “Linkage,” moreover, was been built in to the policy process. As the journalist Josh Rogin noted: “All Syria proposals at State must go through the office of the undersecretary for political affairs, Wendy Sherman, who is also the administration’s lead negotiator over a nuclear deal with Iran.”

On the specifics of a deal, I tend to think, like many, that the U.S. made too many concessions, without getting enough in return. According to the New York Times, in the final days of talks, a television anchor on a hardline Iranian channel said: “The fact is, Obama needs this deal much more than we do.” She went on: “The American president needs a victory, and only a deal with Iran can give him that. They have retreated on several issues and compromised on their own red lines.” Whether or not this perception is fair, it’s a perception nonetheless, and perceptions drive behavior.

Others have noted that Iran, due to its deteriorating economy, needed a deal more than the U.S. did. This is almost certainly true. But while Iran may have needed it more, the U.S. wanted it more – or, at the very least, seemed like it did. Some of this, to be fair, was outside the U.S.’s control. The perception had already solidified throughout the region, drawing on 6 years of observing the Obama administration’s handling of various crises, most notably the backing down from stated “red lines” in Syria. Allies, such as Egypt, and enemies, such as Syria, have grown confident that we’ll blink first in a staring contest, in part because we usually do. This was why I was skeptical that any final deal could ever be the best possible deal. The administration has had tendency to misuse and/or underestimate its leverage in some of our most important bilateral relationships. As the negotiations wrapped to a close, there was no obvious way to address this. It was too late. We couldn’t change how Iran viewed the Obama administration.

There was a related asymmetry during the negotiations. As Pollack writes, “I don’t think that Iran values a nuclear deal as much as it does its positions in these various countries.” With us, it was the reverse: we cared less about Iran’s positions in various countries and more about its nuclear program. This, too, was built in to the talks.

Some are troubled that most people had strong opinions about the deal before reading the actual text of the agreement. One certainly hopes that legislators will eventually read at least some of it. But the specifics of the deal aren’t, ultimately, as important as the broader issues and implications, and those aren’t anywhere to be found in the text. Here, I tend to agree with my colleague Jeremy Shapiro who argued in April that that the devil wasn’t in the details. The details “really don’t matter.” He goes on: “At heart, this is a fight over what to do about Iran’s challenge to U.S. leadership in the Middle East and the threat that Iranian geopolitical ambitions pose to U.S. allies.”

In other words, your position on the Iran deal is likely to depend on how you view the Middle East and America’s role in it more broadly. If you see the Syrian civil war as a, or even the, core regional conflict, then you’re probably worried about the $100 billion in potential sanctions relief. Iran, even we assume it chooses butter over guns as American officials hope and uses, say, only 3 percent of that total, will have $3 billion more to prop up the Syrian regime and other regional allies and proxies. It also depends on your starting assumptions about the nature of the Iranian regime. Are Iranian leaders “rational,” and do you think it matters whether “moderates,” such as President Rouhani and Foreign Minister Zarif, are empowered over their “hardline” counterparts?

For me, at least one other issue comes into play, and it’s a factor which has pushed me to be more supportive of the Iran deal than I expected to be. It’s striking how little discussion there has been about what Iranians think and want. As small-d democrats, Americans should always at least take into account public opinion in other countries. Presumably, Iranians know their country better than American politicians do. According to opinion polls, a majority of Iranians favor a deal. We all saw the pictures of ordinary Iranians celebrating the framework agreement in April. This time around, the regime has been more careful, closing off public spaces, with hardliners warning of the dangers of Iran Deal-induced “happiness.” Importantly, as Nader Hashemi notes, “some of the most vociferous defenders of a nuclear deal with the West are Iranian civil society and human rights activists.” It makes little sense for us to say that an Iran deal will make progress on human rights less likely, when Iran’s own human rights activists seem to think the opposite. In a survey of 22 leading human rights activists, support for ongoing negotiations was “unanimous,” while over half believed that a deal would lead to a significant improvement in human rights in Iran. Of course, they could be wrong, but we shouldn’t bet on that.

To be sure, the link between a deal and the empowerment of Iranian reformers, as intuitive as it might seem, is far from guaranteed. As many have noted, conservatives may be just as likely to gain from a deal for any number of reasons. What seems inescapable, however, is that the failure of negotiations would have been a major, perhaps even decisive loss for Iran’s reformist trend. President Hassan Rouhani, who buoyed expectations with his come-from-behind election victory two years ago, has been losing popularity and goodwill. On human rights, he pledged to expand personal freedoms and broaden space for civil society. As for the economy, it can sputter along, as it has, but without sanctions relief, Rouhani’s hands are tied. His raison d’etre, then, depends on a successful deal. Without one, we would have likely had more of the same: conservatives in control and dominating the country’s politics. Now at the least there is a glimmer of possibility, even if the road toward substantive reforms remains a difficult one.

Taking these various, and very different, factors into account, the deal is, on balance, a mixed bag. I don’t think an Iran nuclear deal deserved the near-obsessive focus it received from this administration. Too much was subsumed and compromised due to the desire for a deal, an administration priority which took precedence over nearly everything else. Now that a deal has been concluded, U.S. officials may have more room to maneuver. Of course, the implementation of a deal will still require constant attention, to say nothing of the domestic fight which is still to come. But perhaps, at some point, the U.S. will be able to act and think beyond Iran’s nuclear program and re-focus attention on the broader issues and conflicts in which Iran plays a major role. The U.S. will now come under pressure to “compensate” (or overcompensate depending on your perspective). It will need to reassure skeptical Gulf allies that it will do more to counter Iran’s regional designs. I agree with Ken Pollack that the best place to do this is probably in Syria. As he writes: “In the aftermath of an Iranian nuclear deal, finally executing the Administration’s proclaimed strategy for Syria, may be the best and only way to regain control over the dangerous confrontation escalating between Iran and America’s Arab allies.”

Now that President Obama’s legacy, however controversial, is secure (both on domestic and foreign policy), he can afford to do the very things he wasn’t willing to do when Iran negotiations were the overwhelming focus. That doesn’t mean he will do them, but that’s where, I hope, the debate over a post-Iran deal Middle East can now turn.

Even after the deal was signed, Obama may have felt his hands remained tied on at least two counts: it remained to be seen whether Iran would follow through in implementing the requirements for sanctions to be lifted, and as we have now just learned, secret negotiations were still under way to secure the release of five Americans imprisoned in Iran. They have now been released and sanctions have been lifted.

One thing that no one was anticipating last July was the impact of Russia’s unforeseen intervention in Syria.

Implementing #JCPOA not a detriment to any country. Our friends are happy & our rivals need not worry. We're no threat to any nation/state.

But stock markets across the Middle East just saw “£27bn wiped off their value” in anticipation of the new wave of Iranian oil flowing into an already flooded market.

With the sanctions now removed, Iran is ready to increase its crude oil exports by 500,000 barrels a day, Deputy Oil Minister Amir Hossein Zamaninia was quoted as saying by the Shana news agency on Sunday.

Iran’s return to an already glutted oil market is one of the factors contributing to a global rout in oil prices, which fell below $30 a barrel last week for the first time in 12 years. Iran is the world’s fourth largest oil producer.

The administration sold the Iran deal by claiming that no deal would make another major war inevitable. The ongoing war in Syria was left out of the equation.

The question now is whether that war is any closer to ending or whether, on the contrary, its conclusion is even further away.

I’m inclined to believe that Shadi Hamid’s assessment last July — that Obama’s objective has always been to minimize U.S. involvement in Syria as much as possible — is just as accurate today as it was then.

If Obama is preoccupied with his legacy, he should be asking himself whether his presidency will be remembered more for what he accomplished through negotiations with Iran or more for what he failed to do as the rest of the region unraveled.

In #Iran today ,good news of sanctions being lifted competes with bad news of MASSIVE disqualifications of candidates for Majlis.