Laurence Chandy, Lorenz Noe and Christine Zhang write: What difference could a philanthropic donation from the world’s richest people make?

To explore this question, we begin by identifying those developing countries that are home to a least one billionaire. (Our analysis is restricted to billionaires by data, not by the potential largesse of the world’s multi-millionaires. We focus our attention on billionaires in the developing world given the traditional focus of philanthropy on domestic causes.) Let’s assume that the richest billionaire in each country agrees to give away half of his or her current wealth among his or her fellow citizens, disbursed evenly over the next 15 years, roughly in accordance with the Giving Pledge promoted by Bill Gates. That money would be used exclusively to finance transfers to poor people based on their current distance from the poverty line. Transfers would be sustained at the same level for the full 15-year period with the aim of providing a modicum of income security that might allow beneficiaries to sustainably escape from poverty by 2030.

The following table summarizes the key results. In each of three countries — Colombia, Georgia, and Swaziland — a single individual’s act of philanthropy could be sufficient to end extreme poverty with immediate effect. Swaziland is an especially striking case as it is among the world’s poorest countries, with 41 percent of its population living under the poverty line. In Brazil, Peru, and the Philippines, poverty could be more than halved, or eliminated altogether if the billionaires could be convinced to match Mark Zuckerberg’s example and increase their donation to 99 percent of their wealth. [Continue reading…] 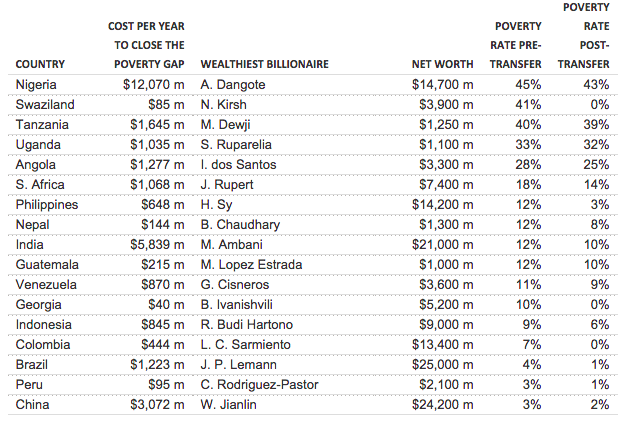