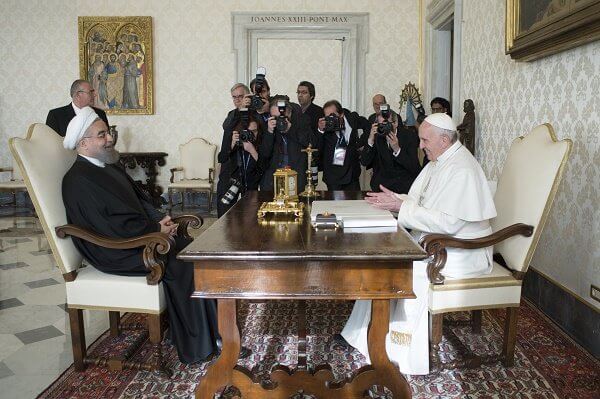 Following a meeting on Tuesday at the Vatican between Pope Francis and Iranian President Hassan Rouhani, and noting that the Vatican has had diplomatic ties with Iran since 1954 (30 years longer than U.S.-Vatican relations), John L. Allen Jr. writes: the close ties between Rome and Tehran reflect the often under-appreciated fact that both the Vatican and post-revolutionary Iran are basically theocracies, representing spiritual traditions — Catholicism and Shia Islam — that have a surprising amount in common.

Iranian writer Vali Nasr, author of the 2006 book “The Shia Revival,” argues that the divide between Sunni and Shia bears comparison to that between Protestants and Catholics, with Shia being the branch closer to Catholicism.

One recent sign of the spiritual vicinity is that Iranian scholars recently translated the Confessions of Augustine and the Catechism of the Catholic Church into Farsi, the result of a 12-year effort.

In terms of sheer realpolitik, both parties also have strong motives for keeping their relationship green.

From Iran’s point of view, it aspires to being not merely a regional but a global player, and to do so it requires not merely “hard” power, to invoke the famous distinction of Harvard political scientist Joseph Nye, but also “soft,” meaning moral legitimacy. The perception of being in dialogue with the Vatican is crucially important, counteracting Bush administration rhetoric about Iran being part of an “axis of evil.”

Tehran also sees the Vatican as a firebreak with sometimes hostile Western nations. In 2007, when it seemed as if concerns over Iran’s nuclear program might lead to armed conflict with the United States, Iranian diplomats quietly sought out the Vatican as a potential mediator. [Continue reading…]