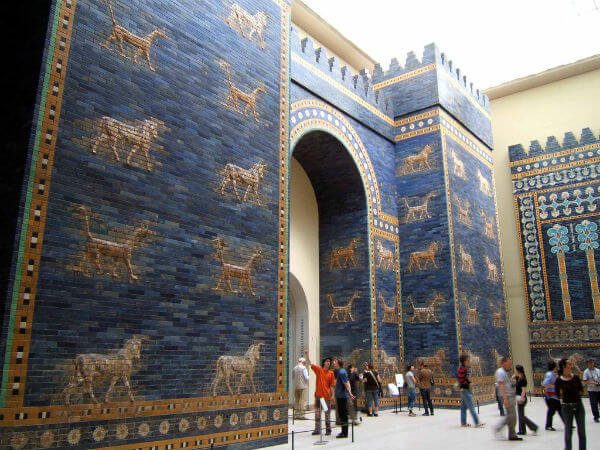 The New York Times reports: The Pergamon Museum is home to the famous Ishtar Gate, a monument of blue and white tile decorated with golden lions and daisies that was once the entrance to ancient Babylon. When Kamal Alramadhani, a 25-year-old Iraqi economics student, saw it for the first time this month, “I got goose bumps,” he said, pointing to his arm.

“It’s from Iraq,” he added quietly, through an Arabic translator. “My country.” A native of Mosul, Mr. Alramadhani studied economics at the University of Baghdad and came to Germany in October, part of a wave of asylum seekers that is stirring opposition here but also leading the government to look for ways to help the migrants adjust.

That afternoon, Mr. Alramadhani and about 30 others — some of them teenagers who had walked much of the way from Syria — were visiting the museum for the first time, on a free Arabic-language tour. It is part of a new and growing state-financed program to introduce the refugees to Germany’s cultural heritage — even, of course, when some of that heritage comes from the Middle East.

The visits can be fraught. “Sometimes people say: ‘The Germans have all our heritage! They stole it!’” said Zoya Masoud, 27, who led the Arabic-language tour that afternoon at the Museum of Islamic Art, which is part of the Pergamon Museum and filled with treasures from empires past. Often, the visitors say the art is probably better off in Berlin because so much in Syria has been destroyed by the war and the Islamic State, Ms. Masoud said.

Other times, the tours bring up raw memories for visitors who have arrived in the last three months. At a painted marble wall niche from a house in Damascus that dates to the 15th and 16th century and was inhabited by Samaritans, a Christian minority, “some people want to cry,” Ms. Masoud said. “When they see the colors and the shapes, they get chills.”

Ms. Masoud is not a refugee — she grew up in Damascus, a child of Syrian and Lebanese parents, and moved to Europe to study in 2010, before Syria fell into civil war. She is one of 19 guides — 18 from Syria and one from Iraq — who are part of a program, called Multaka, or “meeting point” in Arabic, which began in December and is aimed at training refugees to become museum guides. [Continue reading…]