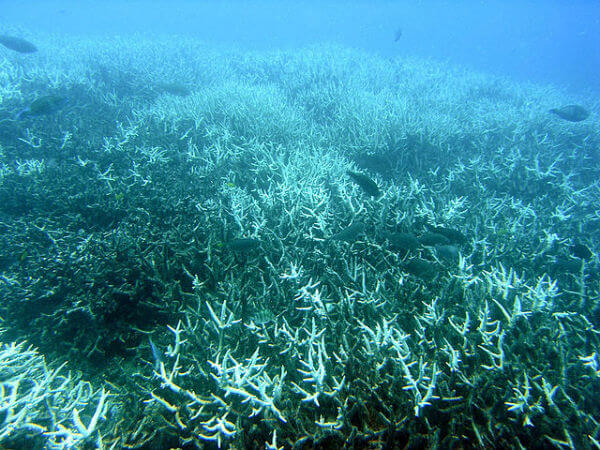 The New York Times reports: Kim Cobb, a marine scientist at the Georgia Institute of Technology, expected the coral to be damaged when she plunged into the deep blue waters off Kiritimati Island, a remote atoll near the center of the Pacific Ocean. Still, she was stunned by what she saw as she descended some 30 feet to the rim of a coral outcropping.

“The entire reef is covered with a red-brown fuzz,” Dr. Cobb said when she returned to the surface after her recent dive. “It is otherworldly. It is algae that has grown over dead coral. It was devastating.”

The damage off Kiritimati is part of a mass bleaching of coral reefs around the world, only the third on record and possibly the worst ever. Scientists believe that heat stress from multiple weather events including the latest severe El Niño, compounded by climate change, has threatened more than a third of Earth’s coral reefs. Many may not recover.

Coral reefs are the crucial incubators of the ocean’s ecosystem, providing food and shelter to a quarter of all marine species, and they support fish stocks that feed more than one billion people. They are made up of millions of tiny animals, called polyps, that form symbiotic relationships with algae, which in turn capture sunlight and carbon dioxide to make sugars that feed the polyps.

An estimated 30 million small-scale fishermen and women depend on reefs for their livelihoods, more than one million in the Philippines alone. In Indonesia, fish supported by the reefs provide the primary source of protein.

“This is a huge, looming planetary crisis, and we are sticking our heads in the sand about it,” said Justin Marshall, the director of CoralWatch at Australia’s University of Queensland. [Continue reading…]