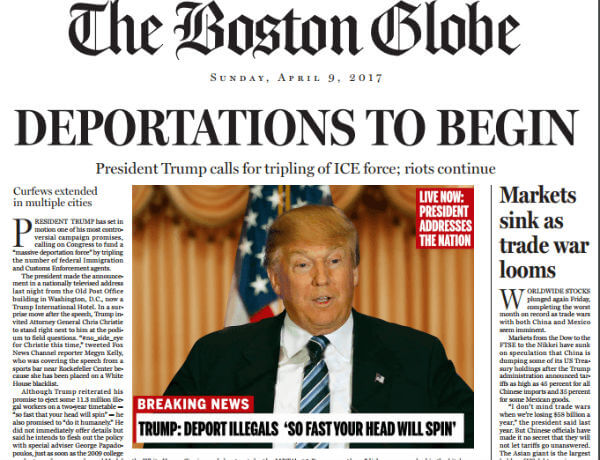 In an editorial, the Boston Globe says: Donald J Trump’s vision for the future of our nation is as deeply disturbing as it is profoundly un-American.

It is easy to find historical antecedents. The rise of demagogic strongmen is an all too common phenomenon on our small planet. And what marks each of those dark episodes is a failure to fathom where a leader’s vision leads, to carry rhetoric to its logical conclusion. The satirical front page of this section [shown above] attempts to do just that, to envision what America looks like with Trump in the White House.

It is an exercise in taking a man at his word. And his vision of America promises to be as appalling in real life as it is in black and white on the page. It is a vision that demands an active and engaged opposition. It requires an opposition as focused on denying Trump the White House as the candidate is flippant and reckless about securing it.

After Wisconsin, the odds have shrunk that Trump will arrive in Cleveland with the requisite 1,237 delegates needed to win the nomination outright. Yet if he’s denied that nomination for falling short of the required delegates, Trump has warned, “You’d have riots. I think you’d have riots.” Indeed, who knows what Trump’s fervent backers are capable of if emboldened by the defeat of their strongman at the hands of the hated party elite. [Continue reading…]