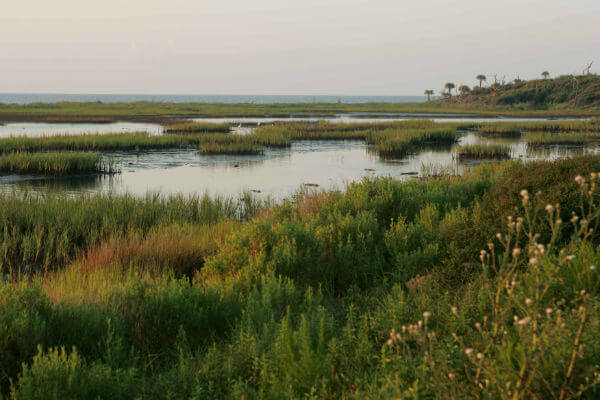 John Upton writes: Councilmembers of an island town in Georgia met in a police station near sandy beaches last week to mull a plan for coping with worsening floods. The meeting followed unprecedented king tide floods in the fall that inundated the island and nearby Savannah, and shut down the highway that connects them.

“We’ve had more frequent flooding in areas that haven’t flooded before,” said Jason Buelterman, mayor of the beach town on the eastern shore of Tybee Island, where the population of a few thousand residents swells each summer with vacationers. “In November, water was coming into people’s garages and stuff. It had never happened before.”

The meeting was held eight days before world leaders were due to converge in New York this Friday to ratify a United Nations treaty, aiming to avert the worst impacts of climate change. If the treaty succeeds, Tybee Island and other coastal communities may flood terribly in the coming decades, but will most likely remain mostly above sea level, recent Antarctic modeling suggests. Vast scientific uncertainties, however, mean even that cannot be assured.

Mayors from small towns, planners from the world’s largest cities and U.N. diplomats are being guided on the details of a looming coastal crisis by sea level projections compiled by a U.N. science panel. The panel’s work includes warnings about the amount of flooding that could be caused by melting in Antarctica, and those warnings have been growing bleaker.

The barren continent — the planet’s greatest reservoir of ice — remains shrouded in frigid mystery, and a lack of scientific knowledge about its ice sheet means scientists can’t yet predict how much flooding it could cause as temperatures continue to climb. A recent study, though, added to concerns that it could begin disintegrating, inundating coastal neighborhoods around the world, unless the heady goals of the new U.N. climate pact are achieved.

The Intergovernmental Panel on Climate Change’s most recent findings, from three years ago, appear to have underestimated the potential seriousness of the Antarctic problem, with sweeping implications for the urgency of pollution cuts — and for the futures of coastal communities like Tybee Island’s.

Instead of the anticipated several feet of sea level rise this century if current pollution rates continue, the latest modeling-based science warns that melting could lead to twice that amount. That sobering estimate is a rough one. [Continue reading…]