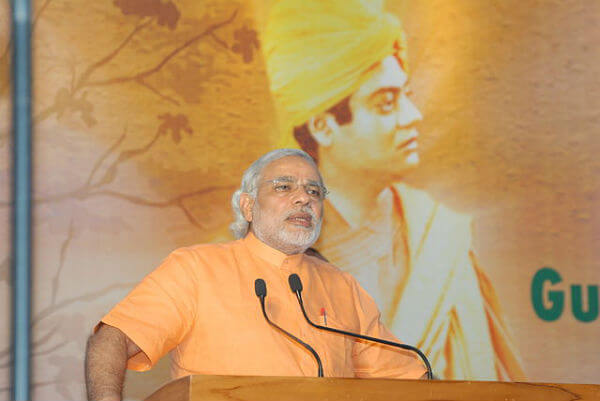 Siddhartha Deb writes: Vivekananda was a remarkable, complex figure, introducing his distinct, modernized version of yoga and neo-Hinduism to the United States. But if his legacy in the West was to be yoga, in India it would morph — helped, no doubt by his early death at 39 — into a muscular Hindu nationalism centered around the idea that Hindus needed to become more aggressive in challenging both Islam and the West. He became a symbol of the Hindu warrior monk who had gone into the West to conquer it for Hinduism, an idea embodied loudly by Modi in his own self-presentation, especially in the cross-armed pose and saffron turban he affected. And just as Vivekananda, in this populist version, took the battle to the West, so did Modi when he arrived at Madison Square Garden.

In India, it took an organization and the onset of race-based nationalism in the early twentieth century to give Vivekananda’s vision a more sinister touch and ultimately connect it to Modi. Founded in 1925 in the central Indian city of Nagpur, the Rashtriya Swayamsevak Sangh (RSS), the National Volunteer Organization, took Vivekananda’s ideas of Hindu revival a step further, combining them with racial theories popular in the West and drawing inspiration from the Italian Fascists and the Nazis. M.S. Golwalkar, who became the chief of the RSS in 1940, wrote approvingly of Germany’s “purging the country of the Semitic Races — the Jews,” and urged Hindus to manifest a similar “Race Spirit” with Muslims. After India became independent in 1947, Nathuram Godse, a former member of the RSS, assassinated Gandhi for being too conciliatory toward Muslims and Pakistan. The RSS was banned briefly, but this was a blip in its steady expansion from its base in the Western state of Maharashtra into neighboring Gujarat, Modi’s home state, and beyond.

The RSS was known for its secretive, cultlike tendencies; it kept no written fundraising records, and produced a constitution only in 1949 as a condition for the lifting of its ban. It stayed away from anticolonial politics under the British and maintained a distance from electoral politics in the decades following independence. It focused, instead, on the ideal of an upper-caste Hindu society within an unabashedly upper-caste, patriarchal Hindu nation. It recruited boys between the ages of six and 18, using doctrinaire lectures and a routine of paramilitary drills to mold their Hindu “Race Spirit,” while its adult members were unleashed as shock troops in riots against Muslims. It maintained links with Hindu-right political parties and Congress leaders favorably inclined to its sectarian idea of India, but avoided direct involvement in parliamentary politics, calling itself a social organization rather than a political one.

This was the organization — disciplined, secretive, tainted by its association with Gandhi’s assassination and its role in sectarian riots — that Modi joined in 1958 as an eight-year-old in the provincial Gujarati town of Vadnagar. He was the third of six children, from a family that ran a tea shop at the railway station to supplement its income from pressing and selling cooking oil. Leaving home as a teenager, Modi wandered the country, possibly to escape living with the wife who had been chosen for him in an arranged marriage at an early age—ironically, just the sort of social practice defended by the Hindu right, despite legislative attempts to make marriage and divorce more equitable, especially for Hindu women — and from whom he remains estranged. He returned after a couple of years to the Gujarati city of Ahmedabad, where he briefly ran a tea stall before joining the RSS full-time. Modi soon completed the RSS’s one-month officer-training program and became a pracharak, or organizer.

One can see the attractions of the RSS for a young man like Modi, filled with ambition and intelligence but without much education or opportunity. Its warrior-monk structure would offer upward mobility and power even as its cultish ideology stoked a sense of humiliation about the place of India in the world, and of Hindus within India. [Continue reading…]