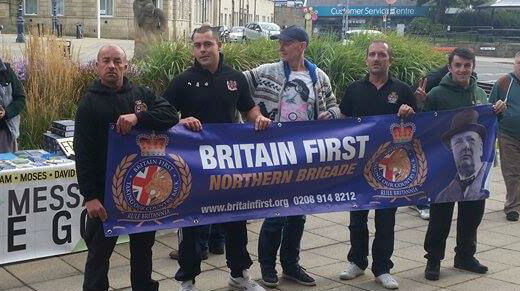 A photo of anti-Muslim protesters in Dewsbury including a man resembling Thomas Mair was posted on the Britain First Facebook page in October 2015. The man’s identity has yet to be established.

The anti-Muslim, extreme right-wing, Britain First party, has disavowed any connection to Thomas Mair, the man who has been charged with murdering British MP Jo Cox.

When Mair appeared in Westminster magistrates court in London today, he answered the judge’s request to confirm his name by saying: “My name is death to traitors, freedom for Britain.”

The prosecution told the court that Mair told police he was “a political activist” as he was being arrested moments after the fatal attack. This assertion was repeated in a summary of crime released by the prosecution.

Mair also allegedly said “this is for Britain” and “keep Britain independent” as he stabbed and shot the MP for Batley and Spen, prosecutors said both in court and in their printed outline of the case.

Whatever assessment is made of Mair’s mental health, there seems to be no question that this was a politically motivated murder.

Witnesses to the murder reported that Mair shouted “Britain first” while attacking Cox.

The photograph above (which is circulating on social media) shows members of Britain First’s Northern Brigade in Dewsbury, West Yorkshire, just three miles away from Birstall where Cox was murdered. Whether the man in the baseball cap is indeed Mair remains unknown. But there is mounting evidence of Mair’s long-standing ties to right-wing extremism in the form of Nazi regalia found in his home along with literature on how to construct homemade guns and explosives.

Britain First recently organized an “activist training camp” in North Wales where its members “learned things including self-defence, martial arts, knife defence,” according to a report at WalesOnline.

In March, Britain First made clear its deadly hostility to EU supporters:

She added: “They think they can get away with ruining our country, turning us into a Third World country, giving away our homes, jobs and heritage, but they will face the wrath of the Britain First movement, make no mistake about it!

“We will not rest until every traitor is punished for their crimes against our country.

“And by punished, I mean good old fashioned British justice at the end of a rope!”