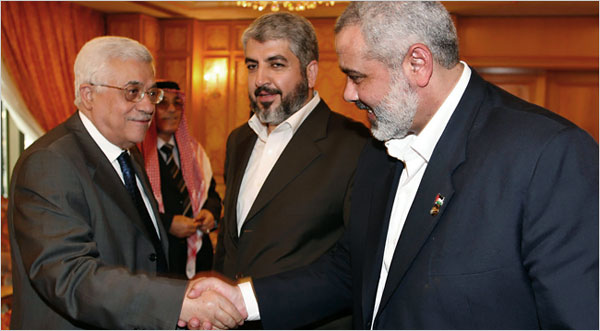 The Fatah–Hamas Mecca Agreement was signed on 8 February 2007

The New York Times reports: The leaders of the two main Palestinian factions met on Thursday in the latest attempt to reconcile after a nine-year schism that has divided their people and complicated efforts to negotiate peace with Israel.

Mahmoud Abbas, the president of the Palestinian Authority, run by the Fatah faction, met in Qatar with Khaled Meshal, the political chief of Hamas, and Ismail Haniyeh, the Hamas leader in Gaza. A photograph of the three men smiling was posted online.

The meeting was the first between Mr. Abbas and Mr. Meshal in two years. Fatah operates primarily in the West Bank under Israeli occupation while Hamas controls Gaza, which is partly cordoned off from the outside world by Israel. Repeated efforts to bridge the divide between the factions have collapsed.

The rival leaders agreed that it was time to repair the rift, establish a national unity government and prepare for elections, the official Palestinian news agency Wafa reported. But it was not clear whether the meeting would lead to an actual agreement, or that such an agreement, even if reached, would prove any more enduring than at least five others sealed over the years. [Continue reading…]