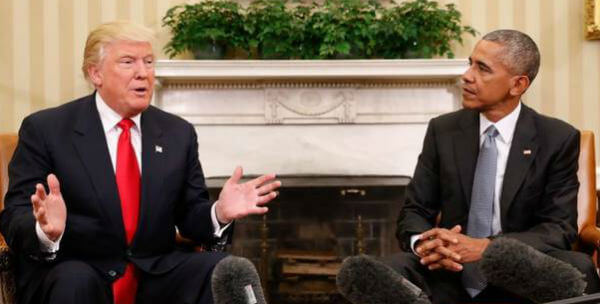 Keep an open mind and keep a sick-bag close at hand.

No doubt there are millions of Americans and others around the world who think it’s too late to view this man with an open mind. He has a history.

At least in spirit I’m with those who’ve taken to the streets, chanting “Not My President” — and I hope they all voted too.

As Rachel Maddow correctly pointed out on Tuesday night: anyone who voted for a candidate who couldn’t win was also in effect saying, I don’t care who becomes president.

But votes cast, miscast, or not cast at all — it’s too late to undo what’s done.

Come January 20, like it or not, Donald Trump will be sworn in as the next president.

To a greater degree, perhaps more than ever before, how this president performs will be deeply affected by how he is perceived. His actions will, to an extent, be molded by our judgments.

In one regard, Donald Trump will be exactly like every other president as he enters office: He will at the outset be faking it.

The inauguration is the beginning of the pretense. Donald Trump’s challenge is whether he can eventually leave office without forever having appeared to be an impostor.

Although Hillary Clinton and Barack Obama might seem to be engaged in a charade with their current conciliatory tone, there is good reason not to view this as mere capitulation.

In spite of Trump being almost universally perceived as disruptive, to a degree rarely acknowledged, he generally plays by the rules — at least when he’s in the spotlight.

This was evident in the debates where it was Hillary who exerted much more power. She dictated whether they would or would not shake hands. She ignored the moderators while he tended to sulkily submit to their commands. Trump acts out but then usually bows to authority.

As Trump takes on the presidency, our only hope is that he is shaped by the office more than he shapes it in his name.

Whether this happens may have less to do with his intentions than it has to do with our ability to take him seriously. (But one small step that might help America and the world come to terms with the concept of President Trump would be for him to delete his Twitter account.)

He just won the biggest prize he could ever imagine and he did so without displaying a shred of personal responsibility.

Treating him the right way now has nothing to do with believing he deserves to have reached this position of power. As Hillary said, we owe him an open mind — but not in the charitable sense of saying he’s deserves a chance to succeed.

If Trump doesn’t grow into the office and learn how to act and look presidential, we won’t be rewarded with the opportunity to gloat at his failure. On the contrary, we will suffer the consequences of that failure as the presidency metastasizes and becomes thoroughly Trumpified and America becomes even more deeply disfigured through his influence.

Already, Trump followers are on the rampage, acting out because they think their leader didn’t just win an election; they think he toppled the establishment and took over the system. They think Trump now rules America and that they can now live by his rules.

If the rest of us refuse to grant him his honeymoon we are in effect encouraging him to likewise go on the loose and act out as the misfit-in-chief.

There are those who argue that it’s already time to be mounting resistance — that we have no reason to question who he is or what he represents — but I would argue that it’s too soon to judge his presidency; that if we judge it prematurely we will share responsibility in creating a self-fulfilling prophesy.

Don’t get me wrong. I’m not imagining this is going to turn out well. On the contrary, I would say: don’t underestimate how bad it can get.

The growth of a president hinges on his ability to understand and adapt to the limits of power.

If we refuse to grant Trump the honor of the title of his office, then instead of him being encouraged to follow the example of those who preceded him, he will indeed become an exceptional president in the worst possible way.

It turns out that insisting Trump was unfit for office was a foolhardy argument to make. It rested on the assumption not only that he was indeed unfit but for that very reason would never actually become president — but now he has.

What was presented by his opponents as unthinkable is now fact and we have to creatively adapt to this reality.