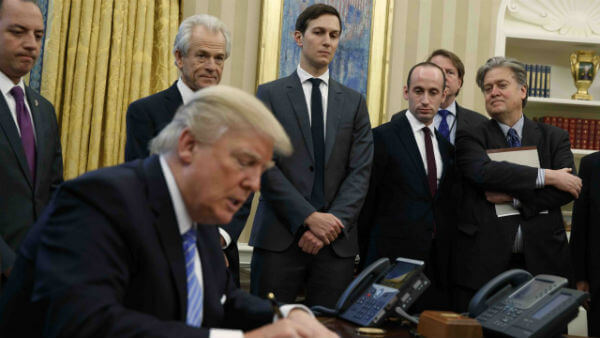 Eliot A Cohen writes: I am not surprised by President Donald Trump’s antics this week. Not by the big splashy pronouncements such as announcing a wall that he would force Mexico to pay for, even as the Mexican foreign minister held talks with American officials in Washington. Not by the quiet, but no less dangerous bureaucratic orders, such as kicking the chairman of the Joint Chiefs of Staff out of meetings of the Principals’ Committee, the senior foreign-policy decision-making group below the president, while inserting his chief ideologist, Steve Bannon, into them. Many conservative foreign-policy and national-security experts saw the dangers last spring and summer, which is why we signed letters denouncing not Trump’s policies but his temperament; not his program but his character.

We were right. And friends who urged us to tone it down, to make our peace with him, to stop saying as loudly as we could “this is abnormal,” to accommodate him, to show loyalty to the Republican Party, to think that he and his advisers could be tamed, were wrong. In an epic week beginning with a dark and divisive inaugural speech, extraordinary attacks on a free press, a visit to the CIA that dishonored a monument to anonymous heroes who paid the ultimate price, and now an attempt to ban selected groups of Muslims (including interpreters who served with our forces in Iraq and those with green cards, though not those from countries with Trump hotels, or from really indispensable states like Saudi Arabia), he has lived down to expectations.

Precisely because the problem is one of temperament and character, it will not get better. It will get worse, as power intoxicates Trump and those around him. It will probably end in calamity — substantial domestic protest and violence, a breakdown of international economic relationships, the collapse of major alliances, or perhaps one or more new wars (even with China) on top of the ones we already have. It will not be surprising in the slightest if his term ends not in four or in eight years, but sooner, with impeachment or removal under the 25th Amendment. The sooner Americans get used to these likelihoods, the better.

The question is, what should Americans do about it? To friends still thinking of serving as political appointees in this administration, beware: When you sell your soul to the Devil, he prefers to collect his purchase on the installment plan. Trump’s disregard for either Secretary of Defense Mattis or Secretary-designate Tillerson in his disastrous policy salvos this week, in favor of his White House advisers, tells you all you need to know about who is really in charge. To be associated with these people is going to be, for all but the strongest characters, an exercise in moral self-destruction. [Continue reading…]