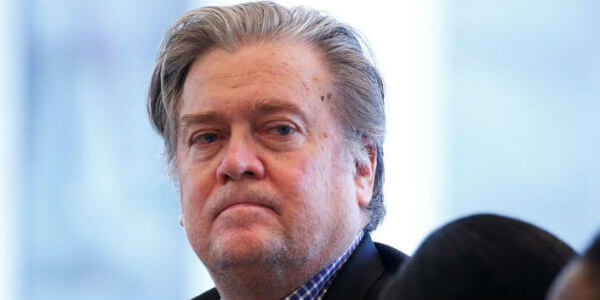 Jonathan Freedland writes: Donald Trump doesn’t read books. He leaves that to his chief strategist, Steve Bannon, the man rapidly emerging as the true power behind the gaudy Trump throne. Given Bannon’s influence – he is the innermost member of the president’s inner circle and will have a permanent seat on the National Security Council, a privilege Trump has denied the head of the US military – it’s worth taking a good look at the books on his bedside table.

Close to the top of the pile, according to this week’s Time magazine, is a book called The Fourth Turning, which argues that human history moves in 80- to 100-year cycles, each one climaxing in a violent cataclysm that destroys the old order and replaces it with something new. For the US, there have been three such upheavals: the founding revolutionary war that ended in 1783, the civil war of the 1860s and the second world war of the 1940s. According to the book, America is on the brink of another.

You’ll notice what all those previous transformations have in common: war on an epic scale. For Bannon, previously impresario of the far-right Breitbart website, that is not a prospect to fear but to relish. Time, which has Bannon on the cover, quotes him all but yearning for large-scale and bloody conflict. “We’re at war” is a favourite Bannon slogan, whether it’s the struggle against jihadism, which Bannon describes as “a global existential war” that may turn into “a major shooting war in the Middle East”, or the looming clash with China.

All this lust for bloodshed may explain why Bannon was unperturbed by the chaos and loathing unleashed by last weekend’s refugee ban, which he drove through with next to no consultation with the rest of the US government. For Bannon is an advocate of the “shock event”. He’s described himself as a “Leninist”, telling one writer in 2013: “Lenin wanted to destroy the state, and that’s my goal too. I want to bring everything crashing down.” It seems war is his chosen method. [Continue reading…]