The Washington Post reports: Attorneys for Michael Flynn, President Trump’s former national security adviser, informed the incoming White House legal counsel during the transition that Flynn might need to register with the government as a foreign agent — a phone call that raised no alarms within Trump’s team, despite the unusual circumstance of having a top national security post filled by someone whose work may have benefited a foreign government.

The firm Flynn headed, Flynn Intel Group, was hired last year when Flynn was an adviser to the Trump campaign by the Netherlands-based firm ­Inovo BV, which is owned by Turkish businessman Ekim Alptekin. Alptekin has close ties to Turkish President Recep Tay­yip Erdogan. [Continue reading…] 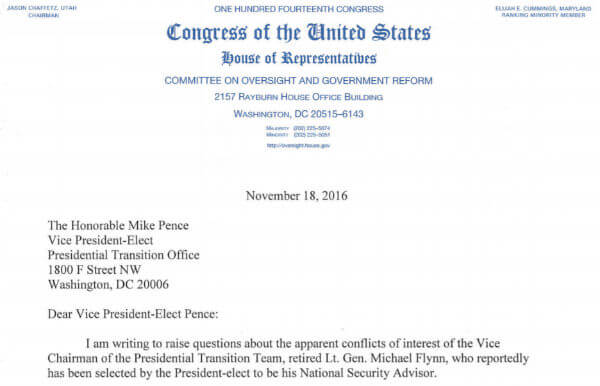 It is impossible that Mike Pence didn't know about Mike Flynn. https://t.co/aVb9itSdVQ

The Daily Caller reports: While serving as a top adviser on Donald Trump’s presidential campaign, Michael Flynn signed a contract in which he agreed to utilize an “investigative laboratory” made up of elite former intelligence officials, including a former CIA director, to conduct research and make “criminal referrals” on behalf of a Dutch shell company linked to the Turkish government, federal records show.

But Flynn appears to have over-promised on the contract, which was signed on Aug. 9 between his firm, Flynn Intel Group, and Inovo BV, the shell company.

R. James Woolsey, the former CIA director identified by his title in the contract as a member of Flynn Intel’s “investigative laboratory,” says he was not aware of and never agreed to perform any of the work laid out in the contract.

The investigative work promised by Flynn Intel was most likely focused on Fethullah Gulen, a Muslim cleric exiled in the U.S. whose extradition is being sought by the Turkish government. [Continue reading…]