Nuclear Threat Initiative reports: Since 2014, North Korea has dramatically altered its missile testing patterns, launching missiles much more frequently and from a variety of new locations. Recognizing the importance of understanding the proliferation implications of these patterns, the James Martin Center for Nonproliferation Studies (CNS) has created a database of every known North Korean missile launch.

The CNS database reveals more subtle changes than simply an increase in the number of missiles that North Korea has launched. The data reveals:

Taken together, these trends make the clear and disturbing point that North Korea has been conducting launch exercises, consistent with the regime’s probable intent to deploy nuclear weapons to missile units throughout the country.

North Korea’s totalitarian regime releases propaganda rather than facts about its missile capabilities. Analysts at CNS estimate the evolution of the regime’s true capabilities by locating every test site and examining open source evidence about the tests, from regime propaganda to satellite imagery. This information helps to determine the purpose of each launch, and how well developed each missile system is. For example, if North Korea only tests a missile at a site from which it conducts developmental tests, it is highly likely the missile remains purely under development. Tests elsewhere suggest North Korea is trying to achieve some other goal than seeing whether the missile works.

North Korea established the Tonghae Satellite Launching Ground, near Musudan-ri, as its first missile testing site in 1984. Tonghae was North Korea’s primary developmental test site for its first generation of ballistic missiles. Because North Korea doesn’t disclose the names and types of its missiles, outside analysts named them after nearby locations – the villages of No-dong, Taepo-dong, and Musudan. Of the fifteen known missile launches carried out under Kim Il Sung, all but one was conducted at Tonghae. At least one-third of these developmental tests, in which North Korea experimented with different designs and attempted to perfect its reverse-engineered missile technology, ended in catastrophic failure.

Developmental testing of new missiles paused for four years after Kim Jong Il succeeded his father in 1994. Kim Jong Il restarted missile testing with an attempted Taepodong launch in 1998. The missile made it off the ground and over Japan before exploding spectacularly and splashing down into the Pacific. The immediate international outcry prompted talks between the United States and North Korea, which resulted in a ballistic missile testing moratorium.

After abandoning the moratorium in 2006, North Korea resumed missile testing. By then, it had converted the Tonghae facility entirely into a space launch facility, which the regime used for two more space launch attempts in 2006 and 2009 (both of which failed). North Korea moved developmental testing of new missiles to a new site near the city of Wonsan, usually called Kittaeryong. Of the 16 rockets that North Korea launched during Kim Jong Il’s rule, only 3 were launched from Tonghae and all of these were space launches – in 1998, 2006 and 2009. All other launches during this period occurred from the Wonsan area. This shift in behavior can clearly be seen in this interactive, which displays the test locations used by Kim Il Sung, Kim Jong Il, and Kim Jong Un. [Continue reading…] 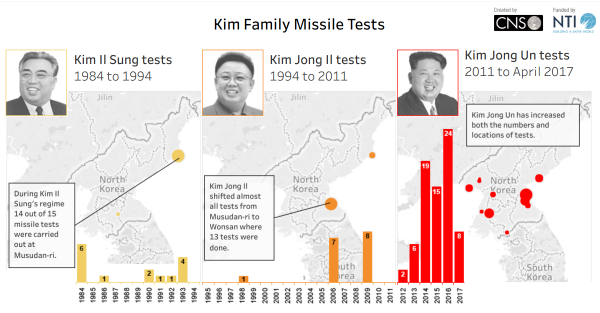