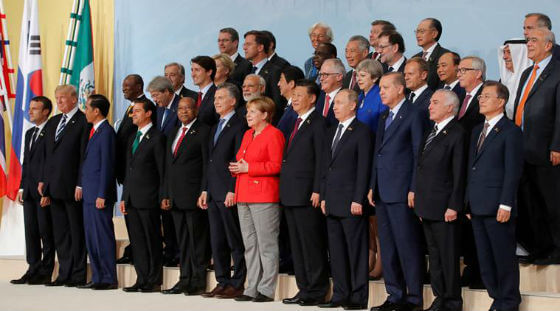 Trump was shunted to the far left and placed under Emmanuel Macron’s close supervision.

The New York Times reports: For years the United States was the dominant force and set the agenda at the annual gathering of the leaders of the world’s largest economies.

But on Friday, when President Trump met with 19 other leaders at the Group of 20 conference, he found the United States isolated on everything from trade to climate change, and faced with the prospect of the group’s issuing a statement on Saturday that lays bare how the United States stands alone.

Chancellor Angela Merkel of Germany, the host of the meeting, opened it by acknowledging the differences between the United States and the rest of the countries. While “compromise can only be found if we accommodate each other’s views,” she said, “we can also say, we differ.”

Ms. Merkel also pointed out that most of the countries supported the Paris accord on climate change, while Mr. Trump has abandoned it. “It will be very interesting to see how we formulate the communiqué tomorrow and make clear that, of course, there are different opinions in this area because the United States of America regrettably” wants to withdraw from the pact, she said.

Mr. Trump seemed to relish his isolation. For him, the critical moment of Friday was his long meeting with the Russian president, Vladimir V. Putin, which seemed to mark the reset in relations that Mr. Trump has been desiring for some time. It also provided Mr. Putin the respect and importance he has long demanded as a global partner to Washington.

Where previous American leaders saw their power as a benevolent force, and were intent on spreading prosperity through open markets and multilateral cooperation, Mr. Trump has portrayed himself as a nationalist, a unilateralist and a protectionist, eager to save American jobs.

What recent events have underscored, though — and especially at the G-20 — is that no nation is today large or powerful enough to impose rules on everyone else. In advancing his views, Mr. Trump has alienated allies and made the United States seem like its own private island. [Continue reading…]