…it turns out that the former prime minister Bhutto’s abrupt departure for Dubai in the United Arab Emirates last Thursday against the advice rendered by most of her party leaders happened just in time when it dawned on the US and Britain that despite their strong urgings, the generals were hell-bent on the imposition of emergency rule. The US and Britain counseled her to get out of harm’s way and quickly leave the country.

The initial statements of “regret” by the Western capitals, especially Washington, need to be taken with a pinch of salt. To be sure, the US policy toward Pakistan finds itself in a cul-de-sac. Musharraf’s move coincides almost to the hour with the thundering speech by President George W Bush at the Heritage Foundation, a Washington-based think-tank, on Thursday in which he blasted the US Congress for failing to take his “war on terror” not seriously enough, and he went on to compare Osama bin Laden to Adolf Hitler and Vladimir Lenin.

Addressing his neo-conservative acolytes, Bush came back to his favorite theme that via his “war on terror”, he was actually waging a global war for democracy and freedom. He compared Islamist “plans to build a totalitarian Islamist empire … stretching from Europe to North Africa, the Middle East and South East Asia” to the Third Reich. He claimed that US-led campaigns have “liberated 50 million people from the clutches of tyranny” in Iraq and Afghanistan. Bush said the people in the Middle East are “looking to the United States to stand up for them”.

Alas, we knew only a day later that just as Bush was speaking, one of his staunchest allies in his pet global war was squashing democracy and freedom. The US doublespeak becomes all too apparent in the mildly reproachful comment over Musharraf’s move, bordering on resignation, by the US spokesmen. It indicates that Washington’s dealings with the Musharraf regime will continue and normal business will resume once the dust has settled down. [complete article] 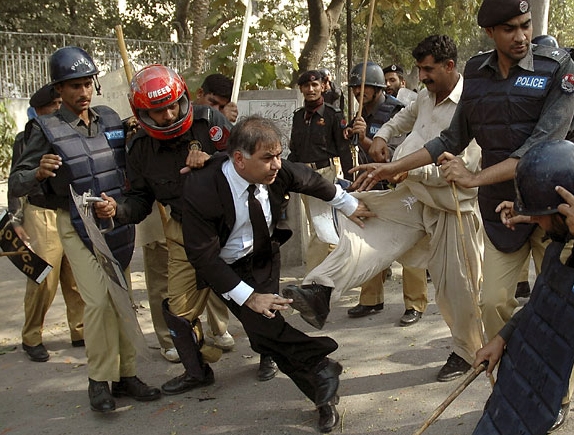 Editor’s Comment — These images of protesting lawyers in Pakistan deserve to become one of the lasting icons of the so-called war on terrorism. The Bush administration — however much handwringing it might engage in — once again has put itself on the wrong side of the law. Tariq Azim Khan, Pakistan’s minister of information, in what the New York Times describes as “unusually candid terms,” says that the United States would rather have a “stable” Pakistan than risk see democracy “fall into the hands of extremists.” In the same cynical spirit as talk-circuit motivational speakers, administration officials have now adopted a the journey is the goal philosophy as they express their hope that General Musharraf can keep Pakistan on the “path to democracy.”

(And here’s a note to America’s legal profession: How about demonstrating outside the White House in solidarity with your Pakistani counterparts? Their willingness to stand up to batton-wielding police is the kind of pro bono work that democracy defenders the world over, should be applauding.)

The key question Musharraf faces is how long the army will continue to back him. Rank-and-file soldiers are keenly aware of the widening gulf between them and the public they are supposed to protect. The army, already demoralized, is unwilling to fight a never-ending war against its own people.

For now, the judges are gone, the media has been censored, the opposition and lawyers jailed and curtailed. But Musharraf’s emergency is not sustainable. Ruling by force without any political support will prove impossible. [complete article]

Pakistani President Pervez Musharraf cited the rising militant threat in declaring a state of emergency on Saturday and suspending the constitution.

But rather than use the more than $7 billion in U.S. military aid to bolster its counter-terrorism capabilities, Pakistan has spent the bulk of it on heavy arms, aircraft and equipment that U.S. officials say are far more suited for conventional warfare with India, its regional rival. [complete article]

Editor’s Comment — Hmmm… So we’re supposed to believe the administration isn’t happy to see military aid being spent on F-16s? On the contrary, it just sounds like that well-oiled revolving door that circulates American tax dollars, allocated as “foreign aid,” back into the pockets of American defense contractors. That’s how the military-industrial complex is designed to run isn’t it?

Fear and brutality inside the fiefdom of Islamist shock jock
By Declan Walsh, The Guardian, November 5, 2007

But now the Swat valley in northern Pakistan has a dark new reputation, as the frontline in the country’s faltering war on Islamist extremism.

On Saturday General Pervez Musharraf cited surging violence in Swat – including suicide bombings, beheadings and kidnappings – as a justification for the imposition of emergency rule. His security forces are battling an Islamist militia led by Maulana Fazlullah, a radical cleric with a flair for theatrics who wants to turn Swat into a mini Islamic fiefdom. The fight has been short but brutal, leaving hundreds dead. [complete article]