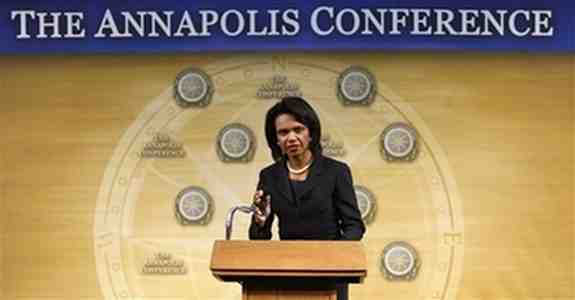 For an event which right up to the last minute was scrambling in search of content (Glenn Kessler provides a useful decoding of the declaration), no effort was spared in putting together a solid stage presentation. The image behind Rice says it all: a compass.

Annapolis was all about pointing in a direction. And as if to underline the fact that there isn’t even a consensus on what that direction should be, the big compass had embedded within it lots of smaller compasses suggesting multiple bearings. All aboard, the peace train is on its way — somewhere.

More than a few commentators were ready to mainline this stuff. David Ignatius notes that “very words ‘peace process’ have a narcotic effect,” — here we have a precious opportunity to dull the pain. “In a Middle East that is already far too volatile, this tranquilizing aspect of the Annapolis process is useful — and shouldn’t be squandered.”

Touchy-feely Jonathan Freedland gets off on what he describes as a “remarkable passage” from Ehud Olmert. This is what Olmert said:

For dozens of years, many Palestinians have been living in camps, disconnected from the environment in which they grew, wallowing in poverty, neglect, alienation, bitterness and a deep, unrelenting sense of deprivation. I know that this pain and deprivation is one of the deepest foundations which fomented the ethos of hatred towards us.

But if Olmert really feels the Palestinians’ pain, how come he’s just about to cut off the electricity to Gaza? An Israeli leader who acknowledges Palestinian suffering and its roots even while he persists in inflicting more suffering is not expressing the empathy that Freedland wants to hear. This is honey-sweetened sadism.

Meanwhile, the mono-metaphor presidency stays perfectly on track. Oblivious to the ambiguity in using the imagery of warfare to describe a peace process, Bush insists that “the battle is underway for the future of the Middle East” and that “we must not cede victory to the extremists.” For observers happy to go along with this worn-out framing of this as a conflict between “moderates” and “extremists,” Hamas and Iran are characterized as the spoilers. It’s as though, absent the extremists, the conflict would have been resolved decades ago. Really?

Who forced 450,000 Israelis to live outside Israel’s internationally recognized borders, largely on seized private Palestinian land? Those who refuse to acknowledge the unambiguous direction of the trendline (shown below), do so because they are unwilling to hear anyone utter its real name: colonization.

The Annapolis skeptics scoff at the connivance of the latest re-branding of the peace process, not because they hate peace but because they can see that the political substance of this enterprise is not aimed at a just and lasting resolution of the conflict. It aims at the perpetuation of a process intended to go on for as long as it takes to destroy the will of those who resist. 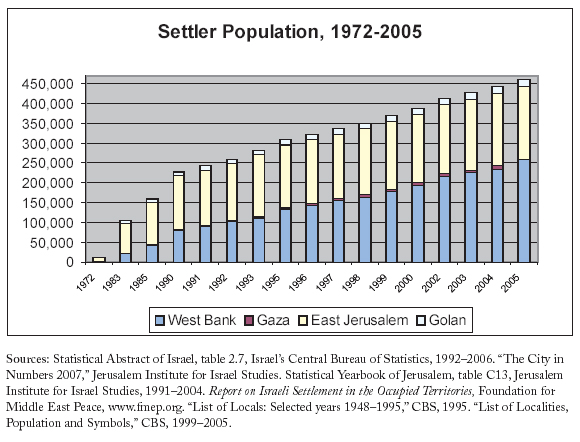 Are we to believe that an Israel that is willing to wall off its Palestinian problem, successfully placing it out of sight and out of mind for most Israelis, will, at some point in the future when no longer faced with any violent opposition, turn around and make magnanimous “concessions”? Or is it much more reasonable to assume that the peace that Israel seeks is merely acquiescence to the status quo?