Fifteen minutes of hate in Silwan
By Meron Rapoport, The Guardian, August 31, 2009 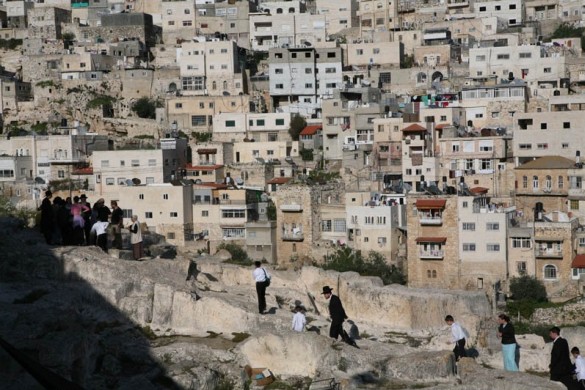 It’s searing hot, but there’s some pleasantness about the stone-flagged path rising from the centre of Silwan, Jerusalem. Maybe it’s the breeze, or the stone houses oozing coolness into the air, or maybe it’s the wide-open mountain landscape. There are three of us – Ilan, the director, Michael, the cameraman and me, the interviewee. We’re making a film on the blatant institutional discrimination against the residents of this Palestinian east-Jerusalem neighbourhood; authorities favour the Jewish settlers who are not hiding their desire to Judaise the neighbourhood, to void it of its Palestinian character.

Even before we position the camera, a group of orthodox Jewish girls, aged about eight to 10, come walking up the path in their ankle-long skirts, pretty, chattering, carefree. One of them slows down beside us, and pleasantly asks us if we want to film her. What would you like to tell us, we ask. I want to say that Jerusalem belongs to us Jews, she says as she walks on, only it’s a pity there are Arabs here. The messiah will only come when there isn’t a single Arab left here. She walks on, and her girlfriends giggle and rejoin her.

Two minutes later a young, well-built young man comes up, carrying a weapon and a radio, without any uniform or tag upon his clothes. Even before he opens his mouth I’m already guessing he’s a security guard, an employee of the private security contractor operated by settlers but sponsored by the housing ministry at an annual budget of NIS 40m (£4.6m). This security company has long since become a private militia policing the entire neighbourhood and intimidating the Palestinian residents without any legal basis whatsoever. A committee set up by a housing minister determined that this arrangement was to cease, and the security of both Palestinian and Jewish residents must be handed over to the Israeli national police. The government endorsed the committee’s conclusions in 2006, but recanted six months later, under settler pressure. The private security contractor went on operating. [continued…]

From Shiloah to Silwan
An Alternative Archaeological Tour of Ancient Jerusalem

Jerusalem began as a small village in a place known as the City of David where the Palestinian village of Silwan sits today. Buried under the village lands, 5000 years of history bind the stories of ancient nations and rulers with the present life of the local residents. Dozens of excavated archaeological strata tell the complex multi-cultural saga of Jerusalem.

We, a group of archaeologists and residents of Silwan, invite you to hear the story of ancient Jerusalem and of life in the village today. Our tour sheds light on the role of archaeology in the Israeli-Palestinian conflict and in the discourse of the future of Jerusalem. We will offer a different perspective: archaeology without an ownership, one that bridges between periods, cultures and nations; archaeology which involves the local residents and examines the past as a shared asset regardless of religion or nationality.

We believe that archaeology in Silwan/”City of David” has the power to change the dynamics of the conflict and promote tolerance and respect for other cultures, past and present, for a better future for both the local residents and the whole region. [continued…]

1 thought on “Fifteen minutes of hate in Silwan”