Hamas, not Abbas, is the Palestinians’ real leader
By Amira Hass, Haaretz, October 5, 2009 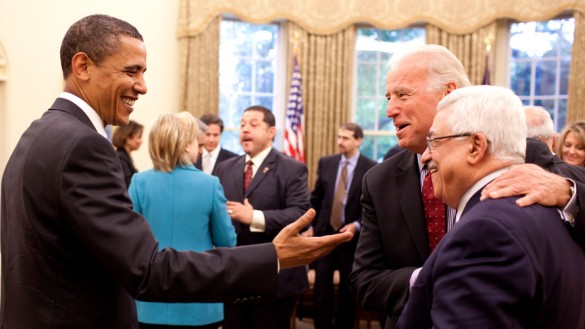 In a single phone call to his man in Geneva, Mahmoud Abbas has demonstrated his disregard for popular action, and his lack of faith in its accumulative power and the place of mass movements in processes of change.

For nine months, thousands of people – Palestinians, their supporters abroad and Israeli anti-occupation activists – toiled to ensure that the legacy of Israel’s military offensive against Gaza would not be consigned to the garbage bin of occupying nations obsessed with their feelings of superiority.

Thanks to the Goldstone report, even in Israel voices began to stammer about the need for an independent inquiry into the assault. But shortly after Abbas was visited by the American consul-general on Thursday, the leader of the Palestine Liberation Organization got on the phone to instruct his representative on the United Nations Human Rights Council to ask his colleagues to postpone the vote on the adoption of the report’s conclusions.

Heavy American pressure and the resumption of peace negotiations were the reasons for Abbas’ move, it was said. Palestinian spokespeople spun various versions over the weekend in an attempt to make the move kosher, explaining that it was not a cancelation but a six-month postponement that Abbas was seeking.

Will the American and European representatives in Geneva support the adoption of the report in six months’ time? Will Israel heed international law in the coming months, stop building in the settlements and announce immediate negotiations on their dismantlement and the establishment of a Palestinian state in the occupied territories? Is this what adoption of the report would have endangered? Of course not. [continued…]

Editor’s Comment — The White House, having initially promised American Jewish community leaders that the Goldstone report could be assured a quiet death (it would reach a “natural conclusion” in the UN Human Rights Council and move no further), then opted for a different choice: half-life might cause fewer political ruptures than sudden death. All that was required was the Mahmoud Abbas be obliging enough to do the administration’s dirty work and get the report shelved. Obama could then maintain his serenity and keep the peace process moving forward.

What kind of imbecile thought that was a plan that would work?

He also suggested that the circumstances which led to the Al-Aqsa Intifada still prevail and called on Palestinians to conduct a “peaceful resistance” campaign.

That’s something Obama and Mitchell might pause to consider.

Hamas leaders on Monday warned that President Mahmoud Abbas’ decision to delay action on a United Nations report criticizing Israel’s offensive in the Gaza Strip was in essence a “justification” of the war and encouragement of occupation.

The report, by Justice Richard Goldstone, criticized both Israel and the Palestinians for the war in January 2008. Last week the Palestinian delegation to the UN Human Rights Council dropped its support for an immediate vote on the report.

Speaking to Gaza lawmakers, Hamas Prime Minister Ismail Haniyeh accused Abbas of having “justified” the war by agreeing to defer a UN vote that would have condemned Israel’s failure to cooperate with the war crimes investigation led by South African judge Richard Goldstone. [continued…]

The Western-backed Palestinian Authority on Monday urged the world to “force [Israel] to put off its attempts to take over Jerusalem and Judaize it,” prompting Orthodox Jews in the United States to vow never to give up their historical right to the ancient city.

The Palestinian cabinet, issuing a strong statement after a meeting in the West Bank town of Ramallah, condemned what it called a plan by Jews to “perform religious rituals” in the Temple Mount compound which contains the al-Aqsa mosque, Islam’s third holiest site.

It also pledged “to confront Israel,” as Israeli security forces clashed with Arab protesters for a second day in the Jerusalem area. In response, the leading body of Orthodox Jews in America condemned the Palestinian Authority and the violence exhibited by Palestinian protesters. [continued…]

Israeli police shut down access to key Muslim holy sites in Jerusalem’s Old City on Sunday, spurring Palestinian protesters to throw rocks and bottles in protest – marking the second consecutive Sunday of disturbances near the city’s overlapping points of prayer for Jews and Muslims.

Clashes broke out in reaction to Israel’s closure of the entrances to the Dome of the Rock and the Al Aqsa Mosque, Islam’s third-holiest site. About 150 Palestinians who gathered for a prayer service near the city’s Lion’s Gate on Sunday morning hurled rocks and bottles at Israeli police, who fired tear gas in attempt to disperse the crowd. Palestinian officials said nine people were treated for light injuries, primarily tear gas inhalation. Israel said two of its policeman were sent to hospitals after being injured by rocks and bottles.

An Israeli police spokesman said that the decision to close the site was made following calls in various Palestinian media on Saturday night to march on the Haram el-Sharif (The Noble Sanctuary), as it is called in Arabic – referred to by Israelis as the Temple Mount. Several Islamic groups claim that an Israeli archeological dig below the site is endangering Al Aqsa and that it will soon collapse, a claim Israel denies. [continued…]