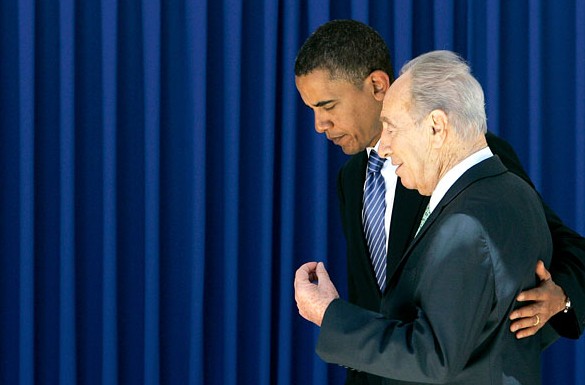 “Very few leaders if at all were able to change the mood of the entire world in such a short while with such profound impact. You provided the entire humanity with fresh hope, with intellectual determination, and a feeling that there is a lord in heaven and believers on earth.

“Under your leadership, peace became a real and original agenda. And from Jerusalem, I am sure all the bells of engagement and understanding will ring again. You gave us a license to dream and act in a noble direction.” Nobel Peace Prize laureate and President of Israel, Shimon Peres.

It’s important not to rush to judgment on Obama — unless the judgment is glowing, then it’s full steam ahead.

If the so-called “reality-based community” still existed, then the very same people who have been suggesting that Obama critics hold their fire should now be insisting the Nobel committee jumped the gun.

Unfortunately that isn’t happening as much as it should. Why? Obama loyalists feel personally embattled. The impulse to grasp on to this fleeting object of relief is for some, irresistible. It’s a quick salve to those whose own unflinching loyalties portend humiliations that lurk down the road.

European Commission President Jose Manuel Barroso said: “The award of the prize to President Obama, leader of the most significant military power in the world, at the beginning of his mandate, is a reflection of the hopes he has raised globally with his vision of a world without nuclear weapons.”

There’s a note of realism there — this is about hopes raised, not accomplishments. The problem is, hope can only be raised so far and for so long. It’s power and durability depends on a strengthening conviction that hope is on a trajectory that leads to actuality. The longer that trajectory remains unclear, the more likely it will be that hope has instead provided the foundation for disappointment, cynicism and bitterness.

Obama traded on hope as a path to power but now he has the power he has to dispense with a large measure of hope. Governance is about deliverables.

It’s not surprising that the Nobel Peace Prize committee have chosen to endorse Obama’s nuclear disarmament initiative. But whether that goal has actually raised hopes globally is something I’m skeptical about. Disarmament is on Obama’s wish-list, but since — in the name of realism — he warned that this might not be accomplished in his lifetime, and since a goal is a dream with a deadline, thus far Obama has merely inspired hope in a dream. Ronald Reagan had that dream too.

Is there a sliver of a silver lining here? Maybe. It’s possible that the Nobel Peace-Prize winning president might feel inhibited from using the Pentagon’s newly-ordered 30,000lb Massive Ordnance Penetrator for destroying nuclear facilities in Iran. On the other hand, he might be persuaded that the destruction of Iran’s nuclear program is a necessary step on the path to nuclear disarmament.

A few other responses.

Turn it down! Politely decline. Say he’s honored but he hasn’t had the time yet to accomplish what he wants to accomplish. Result: He gets at least the same amount of glory–and helps solve his narcissism problem and his Fred Armisen (‘What’s he done?’) problem, demonstrating that he’s uncomfortable with his reputation as a man overcelebrated for his potential long before he’s started to realize it. … Plus he doesn’t have to waste time, during a fairly crucial period, working on yet another grand speech. … And the downside is … what? That the Nobel Committee feels dissed? … P.S.: It’s not as if Congress is going to think, well, he’s won the Nobel Peace Prize so let’s pass health care reform. But the possibility for a Nobel backlash seems non-farfetched.

Taliban spokesman Zabihullah Mujahid said it was absurd to give a peace award to a man who had sent 21,000 extra troops to Afghanistan to escalate a war.

“The Nobel prize for peace? Obama should have won the ‘Nobel Prize for escalating violence and killing civilians’,” he told Reuters by telephone from an undisclosed location.

“When Obama replaced President Bush, the Afghan people thought that he would not follow in Bush’s footsteps. Unfortunately, Obama actually even went one step further.”

The prize is clearly an award of huge significance, awarded after only the deepest reflection, and won only by demi-Gods.

President Obama has changed how the world feels about America. He’s lifted the planet’s mood. This guy is global Prozac.

1 thought on “Barack Obama to follow in Shimon Peres’ footsteps”