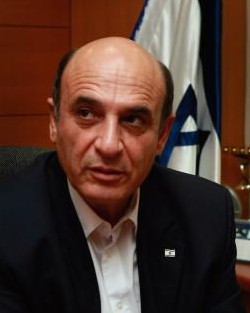 On Sunday, Mofaz presented his peace plan, which calls for the establishment within a year of a Palestinian state with provisional boundaries on 60 percent of the West Bank. He urged dialogue with Hamas as a means of achieving peace with the Palestinians.

Mofaz portrayed his proposal as a challenge not only to Prime Minister Benjamin Netanyahu but also to his own party’s leader, Tzipi Livni.

The plan sparked severe criticism, both from the Palestinians as well as within Israel. In response, Mofaz said Monday that “I will talk to the devil himself if that’s what will bring peace,” Israel Radio reported.

In recent years, Mofaz has vehemently rejected any contact with the Islamist Hamas, who violently seized control over the Gaza Strip in a bloody coup in 2007. In a complete turnaround, Mofaz told Israel Radio Monday that if Hamas is voted to power in the upcoming elections – scheduled for January – he is willing to negotiate with them. [continued…]

Something is stirring within the Hamas body politic, a moderating trend that, if nourished and engaged, could transform Palestinian politics and the Arab-Israeli peace process. There are unmistakable signs that the religiously based radical movement has subtly changed its uncompromising posture on Israel.

For example, in the last few months top Hamas officials have publicly stressed that they want to be part of the solution of the Palestinian-Israeli conflict, not part of the problem. What is happening inside Hamas’ mosques and social base shows a concerted effort on the part of its leadership to re-educate its rank and file about co-existence with the Jewish state and in so doing mentally prepare them for a permanent settlement in the future.

In Gazan mosques, pro-Hamas clerics have begun to cite the example of Salah al-Din al-Ayubi, a famed Muslim military commander and statesman, who, after liberating Jerusalem from the Western Crusaders, allowed them to retain a coastal state of their own. The moral lesson of the story is that if the famed leader could tolerate the warring, bloodthirsty Crusaders, then today’s Palestinians should be willing to live peacefully with a Jewish state in their midst. [continued…]

The possible collapse of the Palestinian Authority, Israel’s negotiating partner, loomed Monday, as several aides to its president, Mahmoud Abbas, said that he intended to resign and forecast that others would follow.

“I think he is realizing that he came all this way with the peace process in order to create a Palestinian state, but he sees no state coming,” Saeb Erekat, the chief Palestinian peace negotiator, said in an interview. “So he really doesn’t think there is a need to be president or to have an Authority. This is not about who is going to replace him. This is about our leaving our posts. You think anybody will stay after he leaves?”

Mr. Abbas warned last week that he would not participate in Palestinian elections he called for, to take place in January. But he has threatened several times before to resign, and many viewed this latest step as a ploy by a Hamlet-like leader upset over Israeli and American policy. Many also noted that the vote might not actually be held, given the Palestinian political fracture and the unwillingness of Hamas, which controls Gaza, to participate.

In the days since, however, his colleagues have come to believe that he is not bluffing. If that is the case, they say, the Palestinian Authority could be endangered. [continued…]

More than 40 years of Israeli military occupation have had a devastating impact on Palestinians in Gaza. Air strikes, artillery shelling, ground invasions, jet flybys and other acts of violence have all led to an epidemic of suffering among Gaza’s most vulnerable inhabitants. The most recent studies indicate that the vast majority of Gaza’s children exhibit symptoms of post-traumatic stress disorder (PTSD).

Soon after the Israeli winter assault, a group of scholars at the University of Washington discussed different aspects of the situation in Gaza and the Occupied Palestinian Territories (OPT). Dr. Evan Kanter, a UW School of Medicine professor and the current president of Physicians for Social Responsibility, delivered a somber talk describing the mental health situation among Gaza’s population. The numbers he cited described a staggering level of psychological trauma.

In the 20th anniversary of the fall of the Berlin Wall, Western leaders are full of self-congratulation. But their paeans to universal freedom ring hollow, when they bear large responsibility for another wall constricting human freedom: the apartheid wall dividing the Palestinian West Bank.

Today, AFP reports, Palestinians tore down a chunk of the wall near Ramallah. [continued…]