The Obama administration is hardening its tone against Israel, but analysts warned Wednesday the tough talk was mere bluster hiding the lack of a viable plan to revive the Middle East peace process.

“You’ve had three ‘no’s’ to an American president in his first year,” Aaron David Miller, who has served as advisor on Middle East peacemaking to previous US administrations, told AFP.

President Barack Obama is now “faced with the default position, which is words,” said Miller from the Woodrow Wilson International Center for Scholars.

“And the louder they shout, the more there is a paradox. The tougher the words are, the weaker we look.” [continued…]

Editor’s Comment — In an interview with Barbara Walters on Tuesday, Sarah Palin said: “I don’t think that the Obama administration has any right to tell Israel that the Jewish settlements cannot expand.”

Americans for Peace Now quickly shot back: “Gov. Palin may not be aware of it, but every American president in the past 40 years — Republican and Democrat alike — has opposed West Bank settlements. They have done so because settlement expansion is bad for American national security interests and because they have cared about Israel’s well-being.”

It’s curious at this juncture that anyone would think the best way to press the argument against settlements is by citing the consistency of Washington’s opposition — opposition that for 40 years has proved to be utterly ineffectual.

To consistently oppose settlement growth while settlements relentlessly expand suggests that Washington is either convinced that it possesses no leverage, or, that its opposition is disingenuous.

Early on, the Obama administration signaled to Israel that it would distinguish itself from its predecessor by saying what it meant: there would be no contradiction between its public and private declarations.

What Obama now needs to grasp is that the greatest asset he held when he came into office — the power of his word — is a fire that has largely turned to ashes.

There may be a few embers in there, but the only way to rebuild the fire is for the president to show the world what he can do. We no longer have any interest in what he has to say.

Israel building Jewish homes with one hand, destroying Arab homes with the other
By Nir Hasson, Haaretz, November 19, 2009 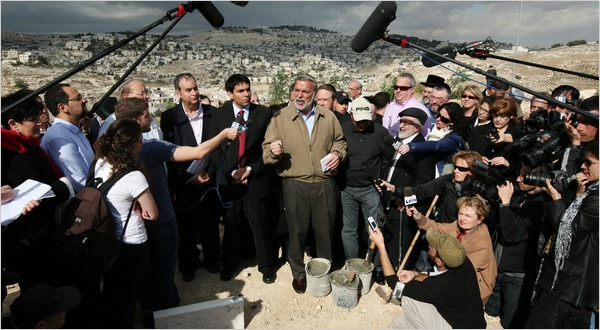 The World Likud movement held a cornerstone-laying ceremony yesterday for the expansion of the neighborhood of Nof Zion, despite – or possibly because of – American pressure against building in East Jerusalem. The Jewish settlement is in the middle of the Arab village of Jabal Mukkaber. Meanwhile, the Jerusalem municipality razed two Palestinian homes in East Jerusalem yesterday.

The plan is to add to Nof Zion 105 new apartments to the 90 ones that are already there, most of which are already occupied. The neighborhood is considered “prestigious,” but the developers ran into trouble a few years ago after they failed to sell the apartments to Jews from overseas. About a year ago the developers changed their marketing strategy to target the local national-religious market – and the apartments began selling quickly. The developers expect the same for the new part of the neighborhood.

The World Likud’s announcement of the ceremony said the neighborhood was near Jabal Mukkaber, “bounded by terraces and with olive trees and grapevines.”

In fact, however, Nof Zion is in the middle of the village, near Palestinian homes. In September Haaretz reported that the family of the late actor-comedian Shaike Ophir criticized the municipality’s decision to name a street in Nof Zion after him.

A group of American Jews interested in buying apartments in Nof Zion attended yesterday’s ceremony. New York State Assemblyman Dov Hikind, who is considered a staunch supporter of the settlers, headed the group.

Addressing the ceremony, MK Danny Danon (Likud) said that Jerusalem will never be a part of negotiations with the Palestinians. He called Barack Obama “naive” and said the U.S. president still does not seem to understand who are the good guys and who are the bad guys in the conflict.

Yesterday the Jerusalem municipality razed two Palestinian homes in East Jerusalem, one in Isawiyah and one in Silwan. In both cases, local residents battled security forces.

In Isawiyah villagers tried to block the entrance to the village with cars, while in Silwan local residents threw rocks at police officers after the house was destroyed.