Leaders in Washington and Jerusalem have publicly locked horns over the issue of West Bank settlements. And Israeli public opinion has largely viewed America’s new administration as unfriendly. But behind the scenes, strategic security relations between the two countries are flourishing.

Israeli officials have been singing the praises of President Obama for his willingness to address their defense concerns and for actions taken by his administration to bolster Israel’s qualitative military edge — an edge eroded, according to Israel, during the final year of the George W. Bush presidency.

Among the new initiatives taken by the administration, the Forward has learned, are adjustments in a massive arms deal the Bush administration made with Arab Gulf states in response to Israeli concerns. There have also been upgrades in U.S.-Israeli military cooperation on missile defense. And a deal is expected next year that will see one of the United States’ most advanced fighter jets go to Israel with some of America’s most sensitive new technology.

Amid the cacophony of U.S.-Israel clashes on the diplomatic front, public attention given to this intensified strategic cooperation has been scant. But in a rare public comment in October, Israeli Ambassador Michael Oren praised the Obama administration’s response to complaints about lost ground during the close of the Bush years as “warm and immediate.” [continued…] 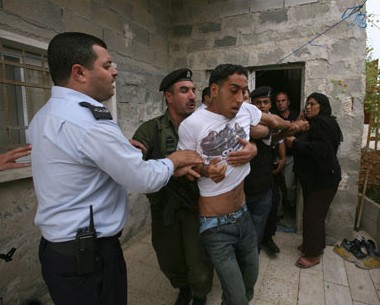 alestinian security agents who have been detaining and allegedly torturing supporters of the Islamist organisation Hamas in the West Bank have been working closely with the CIA, the Guardian has learned.

Less than a year after Barack Obama signed an executive order that prohibited torture and provided for the lawful interrogation of detainees in US custody, evidence is emerging the CIA is co-operating with security agents whose continuing use of torture has been widely documented by human rights groups.

The relationship between the CIA and the two Palestinian agencies involved – Preventive Security Organisation (PSO) and General Intelligence Service (GI) – is said by some western diplomats and other officials in the region to be so close that the American agency appears to be supervising the Palestinians’ work.

One senior western official said: “The [Central Intelligence] Agency consider them as their property, those two Palestinian services.” A diplomatic source added that US influence over the agencies was so great they could be considered “an advanced arm of the war on terror”. [continued…]

President Barack Obama has warned his Chinese counterpart that the United States would not be able to keep Israel from attacking Iranian nuclear installations for much longer, senior officials in Jerusalem told Haaretz.

They said Obama warned President Hu Jintao during the American’s visit to Beijing a month ago as part of the U.S. attempt to convince the Chinese to support strict sanctions on Tehran if it does not accept Western proposals for its nuclear program.

The Israeli officials, who asked to remain anonymous due to the sensitivity of the matter, said the United States had informed Israel on Obama’s meetings in Beijing on Iran. They said Obama made it clear to Hu that at some point the United States would no longer be able to prevent Israel from acting as it saw fit in response to the perceived Iranian threat.

After the Beijing summit, the U.S. administration thought the Chinese had understood the message; Beijing agreed to join the condemnation of Iran by the International Atomic Energy Agency only a week after Obama’s visit. But in the past two weeks the Chinese have maintained their hard stance regarding the West’s wishes to impose sanctions on the Islamic Republic.

The Israeli officials say the Americans now understand that the Chinese agreed to join the condemnation announcement only because Obama made a personal request to Hu, not as part of a policy change.

The Chinese have even refused a Saudi-American initiative designed to end Chinese dependence on Iranian oil, which would allow China to agree to the sanctions, said the Israeli officials.

Saudi Arabia, which is also very worried about the Iranian nuclear program and keen to advance international steps against Iran, offered to supply the Chinese the same quantity of oil the Iranians now provide, and at much cheaper prices. But China rejected the deal.

Since Obama’s visit, the Chinese have refused to join any measures to impose sanctions. The Israeli officials say the Chinese have been giving unclear answers and have not been responding to the claims by Western nations. Beijing has been making do with statements such as “the time has not yet arrived for sanctions.”

China’s actions are particularly problematic because China will take over the presidency of the UN Security Council in January. Western diplomats say China would have no choice but to join in sanctions if Russia agrees to support them, but China could delay discussions and postpone any decision until February, when France becomes council president.