Update – Ayman Taha, a Hamas spokesman in Gaza, was reported saying: “These statements concerning PA [Palestinian Authority] involvement [in Mahmoud al-Mabhouh’s murder] are too hasty. This is not the official position of the movement, that the PA was involved. When the investigation is finished, we will announce who is behind the killing.” His statement followed reports such as the one below from Ynet identifying two Palestinians detained in Dubai and a report in The Guardian claiming that a Hamas operative Nahro Massoud was being questioned in Damascus about the Dubai killing.

In Jordan, an informed Palestinian source said that it was likely that the two Palestinians who were handed over to the UAE authorities by Jordan were in possession of Palestinian passports specifically used by Gaza Strip residents. He said that the two Palestinians were most likely residing in the UAE, and fled the country via the Queen Alia International Airport in Amman aboard a Royal Jordanian Airlines flight but without first securing the proper visas, and were therefore not allowed to enter Jordanian territory.

The source, who preferred to remain anonymous, said that any Palestinian living abroad or in the Gaza Strip needs a visa from the Jordanian Ministry of Interior and the consent of the security services prior to entering Jordan, whereas West Bank citizens are able to enter Jordan via the King Hussein Bridge and are not required to obtain all of these documents. He said that the two Palestinians were arrested in the airports transit lounge after the security services received information from UAE authorities that the two wanted figures had boarded a plane to Jordan.

Whatever the role of the two Palestinians detained by the Dubai police, one fact is striking: all the other operatives belonging to the team that they were supposedly collaborating with made a clean getaway. So how come these two guys didn’t have suitable travel documents? It makes you wonder whether they were recruited simply as a means to try and so division among Palestinians.

While the diplomatic fallout from the Dubai murder continues to expand, there are several new twists in the story.

Though the real identities of the murder suspects whose passport photographs have been released are unknown, two Palestinian suspects under arrest in Dubai have been linked to Mohammed Dahlan, the Fatah security chief who was ousted from Gaza in June 2007. Dahlan has been accused in the past of collaborating with Israel and being a CIA agent. 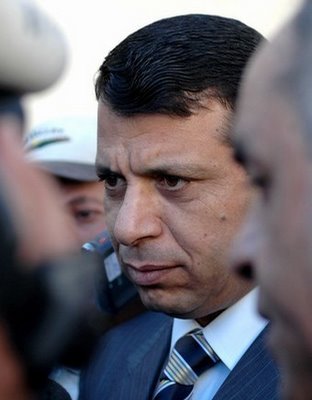 A senior Hamas official told Ynet on Thursday that Anwar Shheibar and Ahmad Hasnain, two officers in the Palestinian General Security Services suspected of being involved in the assassination of Hamas’ Mahmoud al-Mabhouh, fled the Gaza Strip after Hamas took power. The suspects were arrested in Jordan and handed over to the Dubai police following the hit.

Shheibar is a resident of the Sabra neighborhood, west of Gaza City, and Hasnain is a member of one of the large families in the Sajaiya neighborhood. The two, both in their 30s, were members in what was known until a few years ago as “the death cells” led by Nabil Tamus, who claimed he was an associate of senior Fatah member Mohammad Dahlan.

Tamus, who led the cells, also left the Gaza Strip around the time Hamas took power. According to Palestinian reports and according to the senior Hamas official, the three were employed by Mohammad Dahlan’s real estate and investment firms in Dubai.

In the past, Dahlan, for his part, vehemently denied conducting any such activities in the United Arab Emirates. “I don’t have the towers people say I have in Dubai,” he used to say in interviews with the media.

Both Shheibar and Hasnain recently received their salaries from the Palestinian Authority in Ramallah. Hamas claims that their arrest proves beyond any doubt that the PA had direct collaboration and deep operational involvement in every detail of the assassination.

Hamas also claims that the Mossad enjoyed logistical support from the two men, who lived in Dubai in recent years, and thus were deeply familiar with the UAE. Hamas said publicly in the past few days that the two are associated with Dahlan’s camp.

Robert Fisk, based on the observations of an “impeccable” source in Abu Dhabi, says that Israel’s intelligence service is suspected by the UAE of having received European assistance.

Collusion. That’s what it’s all about. The United Arab Emirates suspect – only suspect, mark you – that Europe’s “security collaboration” with Israel has crossed a line into illegality, where British passports (and those of other other EU nations) can now be used to send Israeli agents into the Gulf to kill Israel’s enemies. At 3.49pm yesterday afternoon (Beirut time, 1.49pm in London), my Lebanese phone rang. It was a source – impeccable, I know him, he spoke with the authority I know he has in Abu Dhabi – to say that “the British passports are real. They are hologram pictures with the biometric stamp. They are not forged or fake. The names were really there. If you can fake a hologram or biometric stamp, what does this mean?”

The voice – I know the man and his origins well – wants to talk. “There are 18 people involved in the killing of Mahmoud al-Mabhouh. Besides the 11 already named, there are two Palestinians who are being interrogated and five others, including a woman. She was part of the team that staked out the hotel lobby.” Two hours later, an SMS arrives on my Beirut phone from Abu Dhabi, the capital of the United Arab Emirates. It is the same source.

“ONE MORE THING,” it says in capital letters, then continues in lower case. “The command room of the operation was in Austria (sic, in fact, all things are “sic” in this report)… meaning the suspects when here did not talk to each other but thru the command room on separate lines to avoid detection or linking themselves to one another… but it was detected and identified OK??” OK? I ask myself.

My source is both angry and insistent. “We have sent out details of the 11 named people to Interpol. Interpol has circulated them to 188 countries – but why hasn’t Britain warned foreign nations that these people are using passports in these names?” There was more to come.

“We have identified five credit cards belonging to these people, all issued in the United States.” The man will not give the EU nationalities of the extra five – this would make two women involved in Mr Mabhouh’s murder. He said that EU countries were cooperating with the UAE, including the UK. But “not one of the countries we have been speaking to has notified Interpol of the passports used in their name. Why not?”

The intrigue will not stop there.