Police revealed 15 more suspects in the Al Mabhouh murder case on Wednesday. The extensive investigation has led to a total of 26 suspects so far involved in the murder of the Hamas official Mahmoud Al Mabhouh at a Dubai hotel. In addition to the previously released list of 11 suspects, Dubai Police has now identified another six suspects, who include a woman who used British passports, a man and three women travelling on Irish passports, two men who used French passports, and three people with Australian passports. The Australians included a woman. 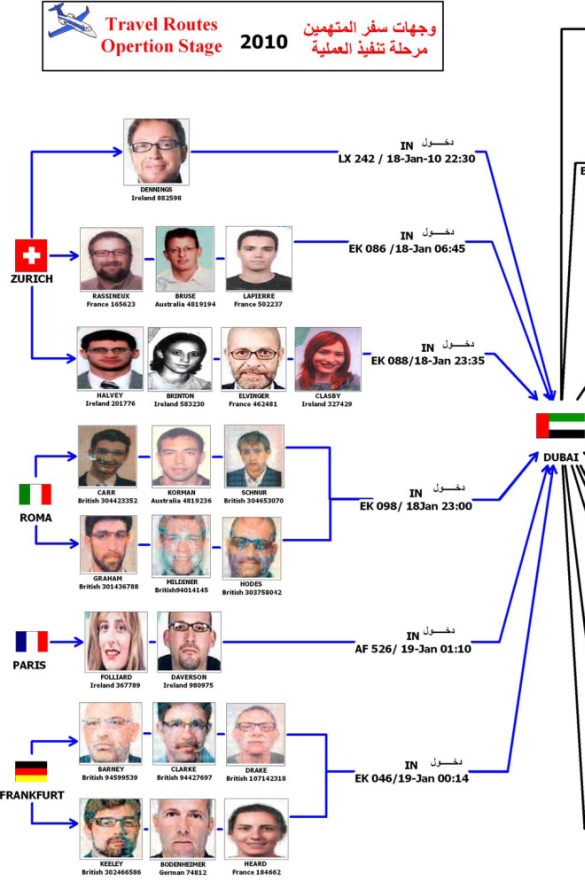 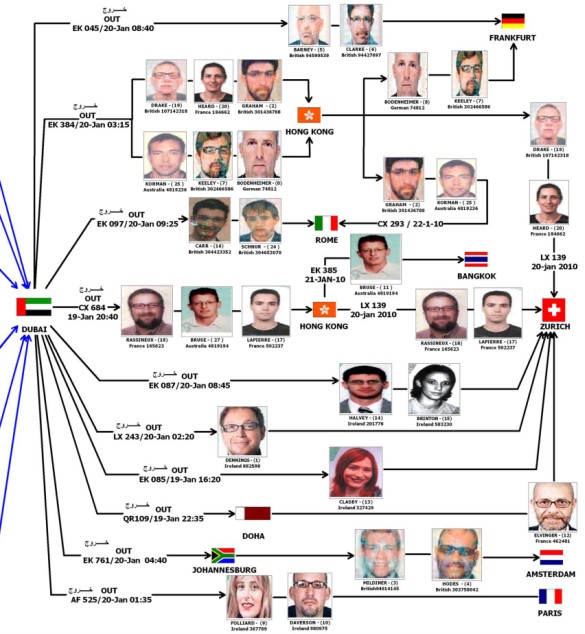 Newly-released video of some of the murder suspects:

With the travel movements and photographs of 26 suspected Mossad operatives now appearing in the international media, how long will it be before one of the murder suspects is arrested? Moreover, since Mossad’s assassination unit apparently included around just 50 agents, one would imagine that with half of them now in hiding (or getting reconstructive plastic surgery to change their appearances) the unit has, for the time being, rendered itself inoperative.

Israeli foreign minister Avigdor Lieberman yesterday flatly rebuffed David Miliband’s request for cooperation with an investigation into the use of forged British passports in the assassination of a Hamas leader.

The request for assistance came as the total number of fake British passports believed to have been used in last month’s assassination rose from six to eight. But private discussions on the sidelines of an EU meeting in Brussels – and an identical request from Irish foreign minister Micheál Martin – yielded no concessions on the Israeli side.

A statement from Mr Lieberman’s office reiterated that there was “no proof” of Israeli involvement in the affair. “If someone would present information beyond articles in the media, we would relate to it,” he is said to have told Mr Miliband. “But since there is no such information, there is no need to deal with the matter.”

A report in the Los Angeles Times, recounting an interview that an Israeli journalist, Ronen Bergman, gave on Israeli Army Radio on Monday, indicates that Mossad has been amazingly slow in covering its tracks:

A man walked in to the interior ministry in Cologne, Germany on June 16, 2009, and claimed that he was Michael Bodenheimer, an Israeli citizen, descended of a German family that had been persecuted by the Nazis.

He applied for German citizenship, saying he wished to leave Israel and emigrate to Germany. He presented documents, including his parents’ German marriage certificate, said he lived in the community of Liman and also gave an address in Herzliya.

The documents must have been convincingly authentic, and two days later, in a model of bureaucratic efficiency that seems atypical (even for Germany), the passport had been issued.

The photograph on the passport is the one now in the papers as one of the assassins, but it is most definitely not that of the Michael Bodenheimer who does live somewhere else in Israel.

The Israeli one is a yeshiva master, an ultraorthodox Jew living in Bnei Brak. His parents were, in fact, born in Frankfurt, Germany, but that’s where the similarity ends. He has Israeli citizenship and evidently American too, but not German.

The new Bodenheimer gave an address in Herzliya. Bergman said the German authorities didn’t check it out. But had they done so, they would have found that he had an apparent shell company in his name with offices in Herzliya.

“Michael Bodenheimer Ltd.” belonged to a group of offices opened by a different company called “Top Office” located on the same floor.

Top Office, says Bergman, is apparently a company that provides individuals and small businesses with an office and secretary at a respectable location.

Bergman said he paid the business address a visit on Friday night, together with the Der Spiegel correspondent in Israel, he told the radio.

He took a picture of the sign saying “Michael Bodenheimer Ltd,” and called the number for Top Office. An American-accented woman answered, sounded very surprised and hung up after saying she didn’t work on the Sabbath.

By Sunday morning, says Bergman, both companies were gone. The signs had been removed.

And the guard — the same one from Friday night — was awfully jittery and tried to shoo them away.

Finally, The Guardian reports on a British man whose identity was stolen by Mossad decades ago:

The infamous 1979 assassination of the Palestinian who masterminded the Munich massacre was carried out using a forged British passport belonging to a 27-year-old council worker living in a small flat in south London, the Guardian can reveal.

Peter Derbyshire, who at the time was running leisure centres for Lambeth council, found himself being questioned by special branch over the assassination of Ali Hassan Salameh, chief of operations for Black September, the terrorist organisation behind the hostage attack at the 1972 Olympics that resulted in the death of 11 Israeli athletes.

Derbyshire, who now runs a travel company in the French Pyrenees, told the Guardian: “I received a call at work from someone who said: ‘I’m from ­special branch. I’m inside your apartment. Can you come home?'”

He returned to find his flat in Balham, south London, had been turned upside down by two special branch officers. He was interrogated for hours by the police, who asked detailed questions about his history and political affiliations.

Eventually they told him his passport number had been used by a man named Peter Scriver in the murder of Salameh in Beirut.