The latest wave of detentions of nearly 50 retired and active duty military personnel as part of an investigation into the Sledgehammer coup plot, allegedly devised by the military to overthrow the government, has put those who strongly denied the authenticity of the plot when it was first made public in a difficult situation.

The Balyoz (Sledgehammer) Security Operation Plan, which was first revealed by the Taraf daily in January, included shady plans such as bombing the most-frequented mosques in İstanbul to trigger chaos in the country with the ultimate goal of a military takeover. While the plan led to nationwide outcry, with many calling on the authorities to punish those behind it, some had suspicions that the plan was “fabricated to defame the military.”

“Although all these claims were so serious that they were referred to judicial bodies, some circles tried to play down the plot or said it was revenge by the government. Instead of saying such plans should have no place in democracies, they denied them, defended them or downplayed them,” Mehmet Altan, a columnist for the Star daily, told Today’s Zaman. 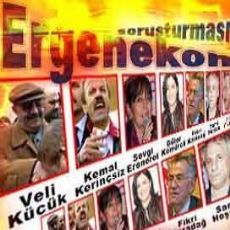 Eleven retired generals and several retired colonels were detained early on Monday as part of an investigation into alleged coup plots named the Sledgehammer and Cage plans, reportedly devised by the military members of Ergenekon, a clandestine gang charged with plotting to overthrow the government.

Police said the operation on Monday was launched when the National Police Department’s criminal investigations unit examined and verified the authenticity of documents regarding the Sledgehammer and Cage plans. The original documents were handed to the Ergenekon prosecutors by Taraf, which exposed both plans.

For decades and decades, Turkey’s powerful generals, even if they often remained behind the scenes, ruled the country. And every Turk knew that. They also knew that if the elected politicians make the generals angry, the latter would come down and teach them a damn good lesson.

I got my own share of this national wisdom when I was 8 years old. That was the time when the military coup of 1980 was launched, and all active politicians, including my father, were arrested by the military. Almost all of them were tried for “high treason,” and similar nonsense, and the military prosecutors had asked for their execution.

As a kid, then, I really wasn’t getting what all this meant. I just knew that my father stopped coming home, and started to stay “at a hotel-like place” as my mom told me after his arrest. For weeks, I insisted to join her during her weekly visits to this “hotel.” And, one day, she took me with her.

The place was the military prison in Mamak, a destitute neighborhood in Ankara, and it really did not look like a hotel. It rather resembled, to be honest, Auschwitz. There was barbed wire everywhere, besides watchtowers with machine guns, and lots of soldiers with rifles. We waited behind a corridor of barbed wire, at 7 a.m. on a snowy day, and then my father, along with a dozen other men, showed up in the distance. Their heads were shaven, and they were made to walk in a straight line while singing some military march. Then they lined on the other side of the corridor. I just remember that my father looked warmly at my scared eyes and said, “Don’t worry, I will come home soon.”

He could come home only after spending 14 months in prison, a long-term arrest for no reasonable reason. Thousands of other politicians or activists were also jailed for months, and sometimes years, and often suffered terrible treatment. Unlike Auschwitz, to be fair, Mamak had no gas chambers. But, along with other military prisons in Istanbul and Diyarbakır, it had torture chambers. Some people died under the unbelievable agony they went through, which included notorious “techniques” that I don’t have the stomach to talk about.

The Turks who have gone through all this don’t know what to say when some presumptuous foreigners, such as Israeli president Shimon Peres, utter incredible words like this:

“Turkey is the only country in the world where a non-democratic institution, the Army, was in charge of preserving democracy. And they did it.”

The Army, of course, was not “preserving democracy.” It was rather preempting it. It was also preventing us from finding non-military solutions to our acute problems such as the Kurdish question or the stalemate in Cyprus. Besides the military coups and interventions — in 1960, 1971, 1980 and 1997 — it was perpetually limiting the scope of democratic politics with the “red lines” it drew on all these big issues.