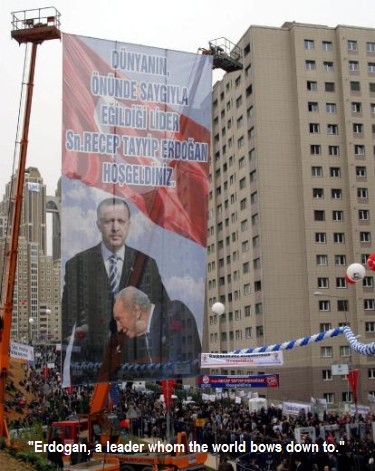 In an interview with the Spanish newspaper El Pais, published on Monday, Turkey’s Prime Minister Recep Tayyip Erdogan said that the Davos incident in which he clashed with Israel’s President Shimon Peres a year ago soon after Israel’s war on Gaza, led to a new Turkish approach to foreign policy.

“That opened a new approach to foreign relations,” he said. “We have a philosophy of strength. It is a foreign policy with a backbone.”

In a graphic response to the insult to Turkey’s ambassador to Israel shown by Israel’s Deputy Foreign Minister Danny Ayalon last month, a poster depicting Peres bowing before Erdogan was briefly unfurled in Istanbul this week.

A huge poster showing Israel’s president bowing to the Turkish prime minister was hung from an Istanbul crane Sunday in the latest round of sniping between the two nations.

The picture, unfurled from a crane in a city suburb, combined an image of Turkish Prime Minister Recep Tayyip Erdoğan standing upright with one of Shimon Peres leaning forward; making it look like the Israeli president was bowing.

Erdoğan was due to visit the area to inaugurate a new road network, and officials from his office had the poster removed before he arrived, the Akşam newspaper said on its Web site.

It was not clear who was behind the stunt, the newspaper said, though it appeared to be retaliation for the public dressing down given to the Turkish ambassador to Israel last month.