To hear it from the Israeli press you’d think that the British government can now make changes to the law simply by having the prime minister write an op-ed.

Last December an arrest warrant was issued for former Israeli foreign minister, Tzipi Livni, when she was expected to arrive in Britain. According to Haaretz she no longer needs to fear getting hand-cuffed for alleged war crimes — at least not on trips to the UK: 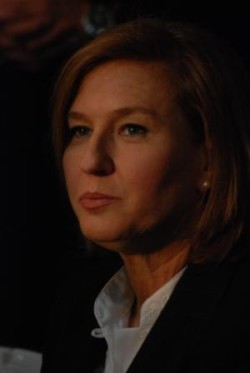 British Prime Minister Gordon Brown announced on Thursday plans to stop politically-motivated campaign groups from securing arrest warrants for visiting foreign officials. In a March 3 editorial in the Daily Telegraph, Brown wrote, “Britain will continue to take action to prosecute or extradite suspected war criminals – regardless of their status or power… But the process by which we take action must guarantee the best results. The only question for me is whether our purpose is best served by a process where an arrest warrant for the gravest crimes can be issued on the slightest of evidence.”

Under the current system, British magistrates are obliged to consider an arrest warrant case presented by any individual. Gordon Brown said he will instead propose that only one government department, the Crown Prosecution Service, evaluate the merits of any case brought under international law.

This move follows an uproar last December when Kadima party leader Tzipi Livni canceled a trip to London because a pro-Palestinian group secured an arrest warrant for alleged crimes committed in Gaza. A statement from Livni’s office praised the new changes proposed by Brown and said that “the British legal system has been abused by cynical elements in the United Kingdom.”

From London The Times presents a very different story:

Britain risks a showdown with Israel today when the Government signals it is in no hurry to ease the threat of arrest for visiting politicians and generals.

Ministers will announce a consultation on the principle of universal jurisdiction, under which private citizens can secure arrest warrants for offences such as war crimes committed abroad.

The Government had promised swift action when the Israeli opposition leader Tzipi Livni cancelled a trip to London last year after a magistrate issued a warrant for her arrest for alleged war crimes in Gaza when she was Foreign Minister.

The issue caused embarrassment for the Government, which promised to remedy the matter quickly. Today’s announcement, however, means that the issue will not be resolved until well after the election, expected in May. When The Times reported last month that a Cabinet split could delay the issue could be delayed for months, Ms Livni threatened to travel to Britain and “take the bullet” as the only way of shaming the Government into action.

After the disclosure that agents suspected of acting for Mossad, the Israeli intelligence service, used fake British passports to enter Dubai and kill a Hamas commander, however, the balance of diplomatic power has shifted.

The delay is a victory for Jack Straw, the Justice Secretary, who has argued that the legal point at stake is too important to rush.

Since the British government just voted in support of a UN General Assembly resolution calling on Israel to fully investigate allegations of war crimes committed during its war on Gaza, maybe they should quietly tell the Israelis that the proposed changes on universal jurisdiction aren’t going to happen if Israel keeps running away from the Goldstone report.

Two unrelated diplomatic upsets have underlined growing impatience with the behaviour of the Israeli government among western countries that are traditionally supportive.

Backing from the European Union and Australia in the United Nations to sustain the issue of Israel’s alleged war crimes in Gaza more than a year ago has coincided with controversy over Israel’s apparent use of western passports in the assassination of Mahmoud al Mabhouh, a Hamas official, in Dubai.

Support for an Arab resolution last Friday at the UN – most EU countries voted in favour while others and Australia abstained – gave Israel and the Palestinians five more months to report back on progress in their respective investigations of war crimes alleged in a report by Richard Goldstone, a South African judge.