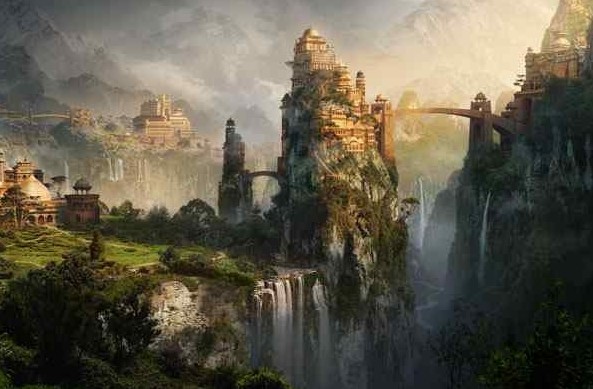 Isn’t it time that the “two-state solution” be regarded as an object of the imagination no more real than the Tibetan kingdom of Shambala?

At the heart of this Middle Eastern fable is another Shangri-La: Jerusalem, capital of the Jewish state and a Palestinian state.

In reality, Jews in an unremitting march of expansion are taking over the whole city, making sure that East Jerusalem will never become a Palestinian capital.

As this report reveals:

Some 50,000 new housing units in Jerusalem neighborhoods beyond the Green Line are in various stages of planning and approval, planning officials told Haaretz. They said Jerusalem’s construction plans for the next few years, even decades, are expected to focus on East Jerusalem.

Most of the housing units will be built in predominantly Jewish neighborhoods beyond the Green Line, while a smaller number of them will be built in Arab neighborhoods. The plans for some 20,000 of the apartments are already in advanced stages of approval and implementation, while plans for the remainder have yet to be submitted to the planning committees.

When the Netanyahu government resisted pressure from the Obama administration to impose a settlement freeze, it also made it clear that it regards Jerusalem as indivisible and outside the scope of any agreement on settlements.

As for the “unprecedented” concessions that Secretary Clinton applauded in late October, this is the outcome:

Three and a half months in, the settlement freeze is turning out to be more of a slowing down. With all the exceptions being made, its effect is limited and it appears to be mainly a demonstration of Israel’s willingness to offer concessions to expedite the renewal of negotiations. The total disappearance of the settlers’ protests against the freeze, which they originally described as a disaster, testifies to the actual state of things.

Meanwhile, Jewish extremists occupying Palestinian homes in Sheikh Jarrah in East Jerusalem have gained attention most recently as they sing the praise of the settler and mass murderer Baruch Goldstein:

Andrew Sullivan sees “massive Israeli demonstrations” as a sign that the Goldstein supporters are a small minority. Their behavior certainly makes them an easy target for criticism but in a way they seem to serve more as a distraction than to highlight the problem.

The plans to expand the Jewish population in East Jerusalem are unlikely to mean that the putative Palestinian capital will be populated with Goldstein supporters. On the contrary, most of these Israelis are likely to move into East Jerusalem for economic rather than ideological reasons, confident that the neighborhoods in which they live will remain under the authority of the Israeli government.

Even if the majority of Israelis actually thought that the creation of a Palestinian state would be a positive development, all the evidence suggests that most Israelis simply don’t believe that such a state is ever going to exist. Israel has invested too deeply in its claim to Palestinian territory to ever let go. Indeed, the perpetuation of the two-state myth has actually served to make a two-state solution impossible.

The impasse in the peace process is not a failure to implement a two-state solution; it is a failure to confront the realities which must be grappled with once such a proposition is abandoned.