I don’t remember Ariel Sharon — or any other Israeli leader — being referred to as a “strongman”. I guess it’s a term reserved for men on the other side. Still, it’s funny (yet predictable) that a Hamas leader such as Dr. Mahmoud al-Zahar will be referred to as a strongman even when what he is reported as saying is that rocket attacks on Israel do not serve Palestinian interests. It’s not exactly a strongmanish, belligerent observation to make. Be that as it may, this is how his comments are reported by Ynet: 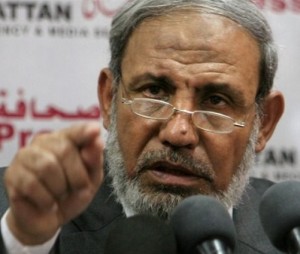 Hamas strongman Dr. Mahmoud al-Zahar on Saturday night slammed the Palestinian groups firing rockets at Israel. Zahar told the Iranian al-Alam television station that the rocket fire was a “suspicious action aimed at allowing the enemy to gain points in its favor in the public opinion and divert the attention from its crimes in the territories.”

According to Zahar, “The enemy wants to portray itself as defending itself against the rocket fire while being criticized by the Quartet. We are aware of the fact that there are elements wishing to help the enemy divert the attention from what is happening in Jerusalem.

“We are closely following those firing the rockets and are aware of the real motives behind the fire,” Zahar said, implying that the groups’ main goal was to undermine Hamas’ rule in the Gaza Strip.

He also slammed the Palestinian Authority for not allowing protests for Jerusalem, and noted that the International Quartet’s decision in Moscow was not serious. “It was more of a media event, and the most important thing is maintaining a popular movement for Jerusalem.”

A previously unknown Gaza group, Ansar al-Sunna, as well as the al-Aqsa Martrys Brigades, a wing of the mainstream Fatah movement, both claimed responsibility for the rocket attack from Gaza that preceded the air raids.

“The jihadist mission came in response to the Zionist assaults against the Ibrahimi and al-Aqsa mosques and the continued Zionist aggression against our people in Jerusalem,” Ansar al-Sunna said in a statement.

Matan Vilnai, the Israeli deputy defence minister, said that regardless of any claims of responsibility, Israel blamed the rocket strike on Hamas, the de facto ruler of the Gaza Strip.