Mind-reading is something that political commentators generally avoid. No one can claim to be any good at it. Yet even if we rarely find out what is actually going on inside a politician’s mind, there are moments when it seems impossible to avoid asking — even without the hope of getting an answer — what was he thinking?

One such moment came as soon as President Obama entered the White House when he signed an executive order to close Guantanamo. Symbolically, this appeared to mark the end of George Bush’s war on terrorism. 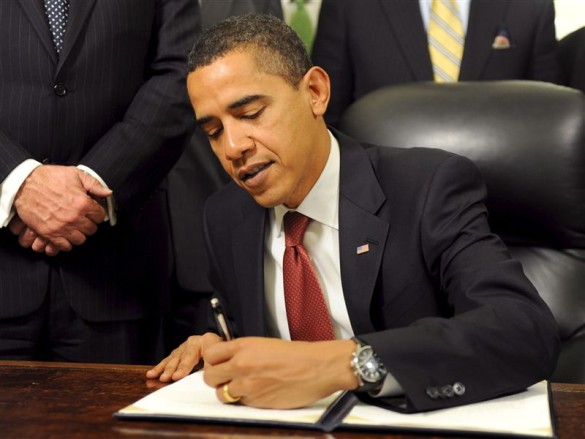 Obama had a wry expression on his face.

They have no idea.

Is that what he was he thinking, even at that moment when Obama euphoria was at its height?

Indeed, we really did have no idea that the president who had promised to end the mindset that led to war would within months of taking office have authorized even more extrajudicial killings than his predecessor and that a take-no-prisoners killing practice would be followed in order to avoid the legal complications of detention.

“Extrajudicial killing” is an Orwellian expression. In plain language it is murder.

Consider the case of Saleh Ali Saleh Nabhan who was killed in a helicopter attack in Somalia last year. Officials debated whether the militant suspected of being linked to al Qaeda should be captured but opted to kill him instead in part because they weren’t sure where he could be detained.

As the Los Angeles Times reports, the administration is still struggling to come up with its own version of Guantanamo, minus the name:

The White House is considering whether to detain international terrorism suspects at a U.S. military base in Afghanistan, senior U.S. officials said, an option that would lead to another prison with the same purpose as Guantanamo Bay, which it has promised to close.

The idea, which would require approval by President Obama, already has drawn resistance from within the government. Army Gen. Stanley A. McCrystal, the top commander of U.S. and NATO forces in Afghanistan, and other senior officials strongly oppose it, fearing that expansion of the U.S. detention facility at Bagram air base could make the job of stabilizing the country even tougher.

That the option of detaining suspects captured outside Afghanistan at Bagram is being contemplated reflects a recognition by the Obama administration that it has few other places to hold and interrogate foreign prisoners without giving them access to the U.S. court system, the officials said.

Without a location outside the United States for sending prisoners, the administration must resort to turning the suspects over to foreign governments, bringing them to the U.S. or even killing them.

In one case last year, U.S. special operations forces killed an Al Qaeda-linked suspect named Saleh Ali Saleh Nabhan in a helicopter attack in southern Somalia rather than trying to capture him, a U.S. official said. Officials had debated trying to take him alive but decided against doing so in part because of uncertainty over where to hold him, the official added.