“Looks like you just lost that bet, Mr. Woodward. I’ll be waiting for your apology,” a reader said after I wrote on Sunday, “if I was to place a bet on who did this, I’d go with someone whose sympathies are probably more Tea Party than Taliban.”

Indeed I was wrong, though I’m not sure what I’m being asked to apologize for. Having engaged in premature speculation or having entertained the suspicion that there could be among the ranks of the Tea Party crowd anyone crazy enough to try and set off a bomb in Times Square? 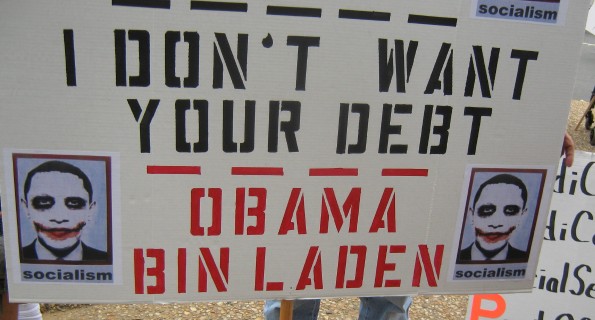 Even if I and others were mistaken in suggesting that the Times Square incident might be connected to the Tea Party movement, the movement itself needs to engage in a bit of self-examination if it wants to understand its image problem — not pretend it’s simply the victim of unfair criticism.

Federal agents have made an arrest in the Times Square bombing attempt. And YouTube may have provided some clues to the investigators.

Faisal Shahzad was attempting to board a plane for Dubai when he was apprehended at New York’s JFK airport. Law enforcement officials believe the Connecticut resident recently bought the 1993 Nissan Pathfinder that was rigged with explosives and fertilizer and left smoldering in Times Square.

One “clue in the investigation is a video posted online early Sunday morning by persons in Connecticut, who may have been involved in the bomb attempt and are being sought by law enforcement,” ABC News reports.

The video (below), features the voice of Qari Hussain Mehsud, the “Pakistani Taliban master trainer of suicide bombers,” according to the Long War Journal. The clip congratulates fellow Muslims for the “jaw-breaking blow to Satan’s USA.” “The attack a revenge” for the slaying of extremist leaders in Iraq and Pakistan, the video continues, and is a response to “the recent rain of drone attacks.”

If Faisal Shahzad was the best recruit the Pakistani Taliban could find, the threat they pose to the United States is probably limited, but DHS Secretary Janet Napolitano’s initial assessment that this was a “one-off” operation is clearly premature. Indeed, if the intense campaign of drone warfare in Pakistan has triggered enough outrage among a few Pakistani Americans to seek revenge in Times Square, then there is one word that this administration should now be thinking about seriously: blowback.

President Obama seems to pride himself in having been less hesitant to take the war to Pakistan than was his predecessor, yet as the reappearance of Hakimullah Mehsud should make clear, the successes of the drone campaign have not been as great as the CIA has often claimed, while the costs have just as frequently been understated.

The bomb-making abilities on display in Times Square may have made some observers respond dismissively — and I am guilty of having done so — but the Taliban’s threat to bring the war to the United States can no longer be regarded as empty rhetoric.