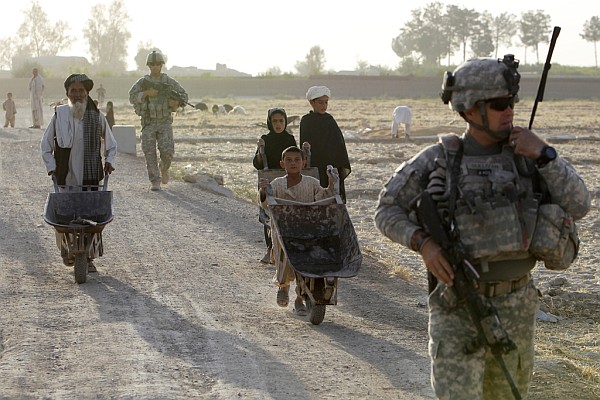 It is a famous axiom of military strategy that “war is the continuation of politics by other means.” This GlobalPost special report looks at how economic aid in Afghanistan has become “war by other means.” It reveals how the “civilian surge” is struggling to succeed and in some places actually creating instability and inadvertently benefiting the Taliban.

Part one: aid as a weapon.

To recast the 19th-century military strategist Carl von Clausewitz’s enduring axiom of war, economic aid has become “the continuation of war by other means.”

Nowhere is this more obvious than in “The Commander’s Guide to Money as a Weapons System,” released by the U.S. Army in early 2009.

It is a handbook for using assistance as a tool of war.

“Warfighters at brigade, battalion, and company level in a counterinsurgency (COIN) environment employ money as a weapons system to win the hearts and minds of the indigenous population to facilitate defeating the insurgents,” says the handbook.

It continues, “Money is one of the primary weapons used by war fighters to achieve successful mission results in COIN and humanitarian operations.”

With the U.S. military escalating troops in Kandahar this summer, a development offensive is part of the strategy. In fact, the “civilian surge,” as it is being called, is already well under way.

A Channel Four News report on the role of Nato-backed militias in Khandahar:

There is a whole new crowd of “security actors” on the Afghan scene.
Known, variously, as “militias,” “arbakai,” “defenders” and even the chillingly euphemistic “guardians,” these groups are springing up with U.S. funding and assistance in some of Afghanistan’s most unstable areas.

But, according to international experts on policing, the new quasi-military actors are more window dressing than actual additions to the security environment. They are intended to create the perception of improvement more than a real solution to a deteriorating security situation. These entities artificially boost numbers on the ground and allow local leaders to boast that they have matters well in hand.

But, in fact, some of the latest initiatives may actually make things worse, by bringing active insurgents into the government, by giving weapons and authority to barely trained local residents who may have personal scores to settle, and by further degrading the already fragile trust the population has in its government.

With his grey silk turban and bushy black beard, Ghulam Mohammad looks just like the Taliban commander that he was for many years.

To many critics what is less convincing is his current title: head of the Afghan Public Protection Program, known as “AP3,” a joint Afghan-American effort to bring security to his home province of Wardak.

Ghulam Mohammad himself seems a bit conflicted about his new role. When questioned about his former allegiance to the Taliban and how that squares with his work on behalf of an American-backed program, Ghulam Mohammad just smiled and shrugged.

“That’s my business,” he said.

With his Taliban past and his U.S.-affiliated present, Ghulam Mohammad seems to embody classically Afghan shades of gray — a mixture of both hope and peril — that make up a controversial component of the U.S. counterinsurgency strategy in Afghanistan.

When a 13-year-old boy asked for admittance to Abdullah’s wedding feast, the groom thought it only hospitable to let him in.

He did, however, think it strange for this young, uninvited guest to be swathed in a blanket-like shawl, or “patu,” given the sweltering summer heat.

Rather than extending felicitations, the young boy darted into the center of a courtyard where the male guests were eating dinner, according to eyewitnesses of the attack.

Seconds later, a massive explosion rocked the night. Dead bodies lay on the carpets spread under the pomegranate trees. Cries and moans could be heard from the injured. Blood soaked into the ground in this remote village in the Arghandab Valley in Kandahar Province.

At least 50 people died in the June 9 attack, according to official estimates; local residents say the total was over 80, with more than 90 injured, including the groom. The June 9 attack in Nagahan was, by any measure, one of the worst of Afghanistan’s brutal suicide attacks, and certainly among the cruelest.

The groom, Abdullah, who like many Afghans goes only by his first name, and at least 12 of the men who were killed in the attack were members of a local tribal militia that sought to protect the village against the Taliban. The militia was also part of a little-known U.S. initiative known as the Local Defense Initiative (LDI) to arm local tribes in the fight against the Taliban in exchange for generous reconstruction projects.

Afghan leaders, U.S. military officials and tribal elders believe the boy was a suicide bomber sent to target the members of this U.S.-backed militia and the families who benefit from development projects attached to the militia’s service.

The attack seems to underscore what many aid and development experts believe is the peril of imposing military strategy into the realm of aid and development. The approach can often serve to create divisions and increase hostilities, these critics say, as it appears to have done in the horrific incident Nagahan.

Formerly program director for the Institute for War & Peace Reporting in Kabul, Jean MacKenzie now works as a journalist trainer and consultant and covers Afghanistan for GlobalPost. She has created a network of Afghan reporters who can gather news and information from all over the country, lending an all-important local perspective to coverage of the conflict there.

4 thoughts on “Jean MacKenzie: war by other means”