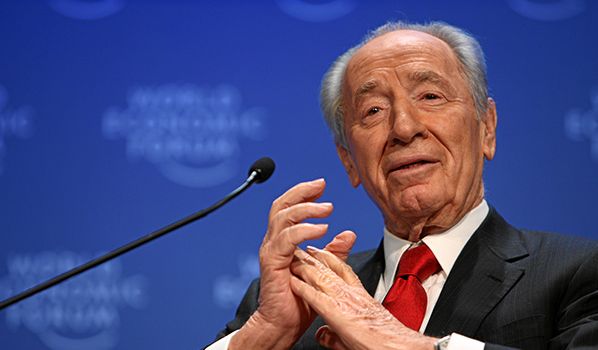 “You write history — I have to make history,” Shimon Peres says at the end of an interview with the Israeli historian Benny Morris.

At times in the interview the Israeli president almost sounds deranged.

The main reason for war was that people earned their livelihood from land. People wanted either to defend their land or conquer more land. From the moment people live from science, force can’t do [anything]. An army can’t overcome science. All these borders will be blurred. The main reason for classic wars has disappeared. What will remain are fanatical religious groups, irrational groups, dangerous to the whole world. They will be destroyed in the end, out of self-defense. There won’t be wars. There will be great rivalry. Football will be more important than war, and science more important than football. There will be a contest to develop nature’s riches. What importance is there today to land?

So I guess Israel, with its fuzzy borders and expanding settlements, is not as it appears to many of us on the outside, a state engaged in old-fashioned colonization, but rather it heralds a future in which land is no longer of any importance.

And what’s Peres’ transcendental perspective on the most contested piece of territory, Jerusalem?

Original Jerusalem, the Sacred Basin, is all told one square kilometer — the Old City, the Temple Mount, that’s the whole story. It’s small, but it’s not territory; it’s a flame, and it is difficult to divide fire, to fence in flames. What can be done? Let’s set aside [the idea of] national sovereignty and let’s look at religious sovereignty. Give each religion responsibility for its own holy sites.

So Israel’s ready to relinquish its claim of national sovereignty with an undivided Jerusalem as its capital and return to the UN’s original proposal for the holy city, internationalization?

All that will do is perpetuate the conflict, but with the involvement of more parties.

Leaving Jerusalem aflame, let’s turn to what for me was the most entertaining part of the interview — where Peres vents some good old Anglophobia (at least there’s one thing Israelis and Iranians see eye-to-eye on) and then reveals that he only watches TV broadcast from Mars.

How do you explain the rise in the delegitimization of Israel in the world in recent years? Do you agree that this is happening?

Let me give you a contrary picture: Israel is the most popular country in the world. [Peres’s media aide giggles. “Benny, you won’t leave here depressed,” she says.] For 2,000 years there was friction between the Vatican and the Jews. There are, what is it, 1.3 billion Christians? Now we have excellent relations with the Vatican. This is no small thing. And we have good relations with India, also hit by Muslim terrorists. And that’s together 3 billion. And [we now have] excellent relations with China.

Right. But why the delegitimization, especially in the West?

Firstly, there is a problem in the Scandinavian countries. They always want to appear like yefei nefesh [the Hebraism roughly translates as “bleeding hearts,” with an undertone of hypocrisy]. And I don’t expect them to understand us. Sweden doesn’t understand why we are at war. For 150 years they have not had a war. There were even Hitler and Stalin, but they kept out of the picture. As did Switzerland. So, they don’t understand why we are “for war,” as if we really like wars. It’s like Marie Antoinette didn’t understand why the people didn’t bake cakes. The same logic.

But it goes a bit beyond [Sweden and Switzerland]?

Our next big problem is England. There are several million Muslim voters. And for many members of parliament, that’s the difference between getting elected and not getting elected. And in England there has always been something deeply pro-Arab, of course, not among all Englishmen, and anti-Israeli, in the establishment. They abstained in the [pro-Zionist] 1947 U.N. Partition Resolution, despite [issuing the pro-Zionist] Balfour Declaration [in 1917]. They maintained an arms embargo against us [in the 1950s]; they had a defense treaty with Jordan; they always worked against us.

But England changed after the 1940s and 1950s. They supported us in 1967, there was Harold Brown [sic — presumably Harold Wilson or Harold Macmillan, both of whom secretly and illegally assisted Israel’s nuclear program] and Mrs. Thatcher [who were pro-Israeli].

There is also support for Israel today [on the British right].

But in Labor there was always a deep pro-Israeli current.

But [the late 1940s prime minister and Labor leader Clement] Attlee was [anti-Israel].

Anyway, this [pro-Israeli current] vanished because they think the Palestinians are the underdog. In their eyes the Arabs are the underdog. Even though this is irrational. Take the Gaza Strip. We unilaterally evacuated the Gaza Strip [in 2005]. We evacuated 8,000 settlers and it was very difficult, after mobilizing 47,000 policemen [and soldiers]. It cost us $2.5 billion in compensation. We left the Gaza Strip completely. Why did they fire rockets at us, for years they fired rockets at us. Why?

You fire rockets at everyone you don’t like? For eight years they fired and we refrained from retaliating. When they fired at us, the British didn’t say a word.

Maybe it is anti-Semitism?

Yes, there is also anti-Semitism. There is in England a saying that an anti-Semite is someone who hates the Jews more than is necessary. But with Germany relations are pretty good, as with Italy and France.

But there is erosion of public pro-Israel sentiment — at the universities, in the press. I’m not talking about the governments.

I’ll tell you why. On television there is an asymmetry that can’t be corrected. What the terrorists do is never broadcast.

So there you have it, from the man who believes Israel is the most popular country in the world and claims that acts of terrorism directed at Israel never appear on TV. What can one say?

As an Englishman, I naturally take an interest in expressions of suspicion or hostility directed towards the British, but there is one point Peres makes that cannot pass without comment: his reference to Muslim voters in Britain. This is where Peres’ racism seeps out since he cannot bring himself to refer to this political constituency as British Muslims. They are for Peres, Muslims with the power to vote — not Britons who practice Islam.

As for the general tone of the interview as it deals with the British current, I’m reminded of similar, if somewhat more forcefully expressed sentiments coming from an American writer who sees Peter Beinart as a victim of the malevolent British influence.

After Beinart wrote his widely acclaimed piece in the New York Review of Books, “The Failure of the American Jewish Establishment,” Jim Sleeper was sure he knew how Beinart’s mind had been corrupted:

Political decay, impotence and bitterness slither out of people in peculiar ways, and, for too many Brits, who have so much more to regret and apologize for and so much bottomless hypocrisy to plumb than Israel ever will, the anguish of decline slithers out against the Jews in eerily disembodied, oddly passionless ways:

“How odd of God to Choose the Jews,” runs a characteristically disdainful verse by the 20th Century British journalist William Norman Ewer. (To which my own riposte is, “Moses, Jesus, Spinoza; Marx, Einstein, and Freud; no wonder the gentiles are annoyed.”)

Well, there are lots of annoying people and things in the world, but British Jews who swallowed Ewer’s hook on some playground or classroom in their early years seem condemned to writhe with it, much as American blacks who’ve internalized a standard of idealized whiteness turn it against blacks who are darker-skinned than themselves, and much as German Jews who’d internalized an idealized German kultur loathed the embarrassing Ostjuden from… Russia and Eastern Europe. Here — and let us not mince words — we are talking about self-hatred, a cold, fine-spun, exacting usurper of sound judgment.

Beinart’s ancestors came from Lithuania, but before World War I they migrated, with a sizable contingent of other Litvaks, to South Africa. In the interwar years of Wilsonian nationalist awakening In Lithuania and all over Europe, many more Lithuanian Jews saw what was rising around them in their home of 500 years and opted for Zionism, transforming their ancestral, liturgical Hebrew into an old/new language and migrating to Palestine in the 1920s and 30s. Still others opted for the more universal promise of Communism in Europe and Russia, and others for capitalist opportunity in America. Those who stayed put were slaughtered — more than 135,000 of them in the woods and fields around their towns and were buried in mass trenches by the Nazi Einsatzgruppen and their Lithuanian recruits in the summer of 1941.

Some Lithuanian-Jewish Communists had fled not to the USSR but to South Africa as well as to America, among them Joseph Slovo, a founder of the African National Congress. A few of the next generation of South African Jews were ANC sympathizers, like the young Ian Shapiro, now a political scientist at Yale. And some of these leftists later became neo-conservatives or bureaucratic apparatchiks in the manner I’ve mentioned, grafting an old mental morphology onto Established Power rather than onto a revolutionary pursuit of Power.

Beinart’s family and most other South African Jews weren’t leftists. They came seeking freedom from persecution and bourgeois. But in South Africa they internalized the idealized British standards I’ve mentioned, and few were immune to internalizing the “odd” but unrelenting British discomfort and pretended bemusement about Jews.

All this prompts many a British Jew’s own efforts at expiation and projection. Even young Beinart, although he grew up in Cambridge, Massachusetts and attended the Buckingham Brown and Nichols School and then Yale, where he was influenced by the Jewish nationalist political theorist Steven Smith, eventually spent a year at Oxford reckoning with whatever aspirations and insecurities the Brits of South Africa had implanted in his parents and, through them, in him.

This is a recipe for the unsavory mix of aspirations and fears we encountered in his writings and his trajectory as I sketch them briefly in bookforum. Although I don’t share their positions, Chait and Goldberg have a point: Beinart, like the estimable Tony Judt, himself a British Jew, is right in principle about Israel’s worst apologists, but he overstates his case for reasons having more to do with swift, dark currents in history and himself than with the complicated realities in Israel and Palestine.

Maybe I need to place a prominent warning on this site, alerting readers about the dangerous influence of the evil country where I grew up.