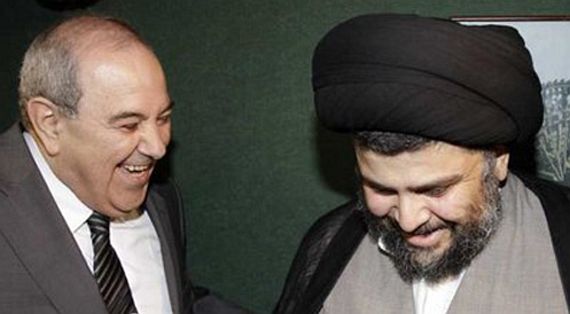 After Moqtada al-Sadr’s recent meeting with Ayad Allawi — a top contender for the prime minister post in Iraq — Babak Dehghanpisheh considers Sadr’s current position as a kingmaker in Iraqi politics and his larger ambitions.

Sadr can, rightfully, claim that his movement is one of the few on the Iraqi political scene that’s homegrown. Compare this to the Sadrists’ top rivals in the Islamic Supreme Council of Iraq (ISCI). For years, they’ve tried to fight the image that they were brought in on American tanks and are beholden to both Washington and Tehran, even changing their name because the Supreme Council for the Islamic Revolution in Iraq sounded too Iranian. They tried appropriating the image of Iraq’s most senior cleric, Ayatollah Ali Sistani, to woo more supporters (there are still posters up around Baghdad showing the late ISCI leaders Ayatollah Mohammad Baqer Hakim and Abdul Aziz Hakim beside Sistani). Nothing worked. ISCI got wiped out at the polls in March and also had a pretty dismal showing during provincial elections last year.

The Sadrists, by contrast, aren’t going anywhere — which puts Washington, among others, in a bind. Sadr’s supporters are more than just a political party. The cleric is clearly following the Hezbollah model, creating a populist political movement backed by a battle-hardened militia. The language Sadr uses when discussing the U.S. presence in Iraq — resistance, occupation, martyrdom — could easily have been taken from a speech by Hezbollah’s leader, Hassan Nasrallah. All this has discouraged U.S. officials from holding talks with Sadr — something they’ve never done since 2003. It’s not exactly like Sadr has gone out of his way to open up a dialogue, either. In fact, Sadr and many of his top aides have made it clear that the Mahdi Army won’t disarm as long as there are American troops on Iraqi soil.
[…]
Sadr’s ambitions don’t cover Iraq’s domestic agenda alone. His high-profile trips to Jordan, Turkey, Lebanon, Saudi Arabia and elsewhere indicate that he wants to be seen as a prominent regional player. He would like to promote his Mahdi Army as a member of the so-called “axis of resistance” made up by Hezbollah and Hamas, both of which have made their names by confronting the United States and Israel.

3 thoughts on “The man who won the war in Iraq”