Palestinian resistance group Hamas has beaten some unusual odds to survive today: Israel’s unlawful siege of Gaza has crippled the coastal strip’s economy and left Hamas scrambling to govern a restless population living under increasingly desperate conditions. Its officials and members are targeted by Israel and the Fatah-led Palestinian Authority (PA) for detention, torture and extrajudicial killings. Pro-US Arab leaders undermine it at every turn, partly to satisfy American demands, partly because they fear the widespread popularity of any moderate Islamist resistance group among their own populations. 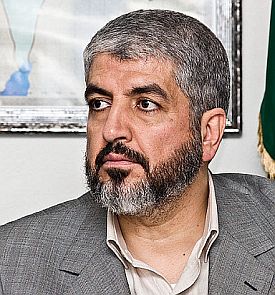 Classified by the US as a “terrorist” organization, Hamas has spent the past year battling armed Salafist extremists who want to enforce Islamic law in the Gaza Strip and who view the Hamas leadership as too weak-willed to challenge Israel’s occupation of Palestine.

It is ironic that Hamas today is criticized for being hardline — and liberal too. Militant — and not militant enough. Islamist — and not Islamist enough. Iranian stooges — and US pawns, both.

I expected to see some of these contradictions in Khaled Meshaal, head of Hamas’ political bureau, when I interviewed him in Damascus recently. What I discovered instead is that, like a select crop of leaders we are seeing in the Middle East today, Meshaal refuses to be seen through one lens only. A real challenge for US policymakers with their unidimensional approach to regional politics.

The former high school physics teacher convincingly argues that the New Middle East is one where nations need to keep their “options open.” He rejects a regional status-quo where countries stay in “blocs” unthinkingly, and vehemently argues against the notion that Mideast democracy and reform cannot advance unless foreign intervention ends.

Khaled Meshaal: Look at a country like Qatar – it has good relations with the United States, used to have a degree of relations with Israel until the Gaza War, and is considered to be a moderate and liberal state. Qatar’s foreign policy is being formed by the views of its leader, the Emir. The situation in the region created a belief, for a country like Qatar, that if it wants to have a role in the region, it has to open up its options in all directions. The one who keeps himself away from the relevant elements in the region, he won’t be relevant himself. In Qatar you have this leadership – someone who is smart and courageous like the Emir. He understands and realizes full well the aspirations and the mood of his own people and the people of the region. So he adopts those issues and causes which are popular among his constituencies, among those nations – which works well if those issues are already close to his own beliefs and his own interests.

Keeping in mind that other Arab countries have for decades been unable to present a successful model that is attractive for others to adopt, this new regional state model has thrived in recent years. These countries – Qatar, Iran, Syria, Sudan, Turkey – share some common elements, but they are not identical to each other. They each have their own modus operandi and interests. Something these nations do share, however, is the self-desire to develop this new trend, but at the same time to remain open – not closed or bound – to enjoying options.

Sharmine Narwani: Not dogmatic, as in the past…

KM: …ah yes, not like that. Why should we be dividing ourselves into two blocs – either being against America and the West, or acquiescing 100% to them?

The people in the region, they are looking for leadership to match their own aspirations and ambitions. In a way we need a model where democracy is there, internal reform, successful economy, justice at the social level – and at the same time, there is independence in their political decisions, away from acquiescing to the threats of Israel – and not being a proxy to foreign, American and Western policies. We do not want to wage a war against the world. Or to sever relations with countries. So the nations and the people of the region want a state model based on self respect – without any enmity with the world. [Read the rest of the interview here.]

The first part of this interview can be read here.

On Monday, Meshaal called on the Palestinian acting president Mahmoud Abbas to end talks with Israel after Prime Minister Netanyahu failed to extend the settlement slowdown which expired on Sunday. Early Monday morning, bulldozers were clearing ground to construct new homes for Jewish settlers in the West Bank.

1 thought on “An interview with Hamas leader Khaled Meshaal”