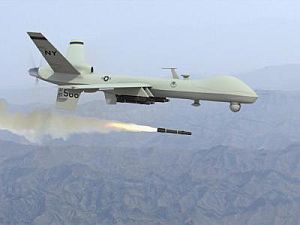 Bob Woodward’s new book, Obama’s Wars, reveals that the White House was so enamored with the CIA’s drone missile campaign in Pakistan, that chief of staff Rahm Emanuel would regularly call the CIA director, Leon Panetta, asking, “Who did we get today?”

Emanuel may have been posing the question because, like President Obama, he shares a perverse thrill in remote killing. Or, he might have asked because Predator warfare turns out to be far less accurate than it proponents would like us to believe.

A legal dispute that was being hammered out in a Boston court this summer, revealed that in its haste to deploy drones, the CIA was willing to use location analysis software that could result in strikes that would be as much as 42 feet off target!

That’s the difference between aiming at one house and destroying the house next door.

Leaving aside the question about how accurate ones intelligence might be about who is inhabiting either house, or the legal issues of what constitutes the battlefield and what can justify extrajudicial killing, or the moral issue of defining innocent bystanders as “collateral damage” — this looks like a case of not being able to shoot straight.

The CIA is implicated in a court case in which it’s claimed it used an illegal, inaccurate software “hack” to direct secret assassination drones in central Asia.

The target of the court action is Netezza, the data warehousing firm that IBM bid $1.7bn for on Monday [Sept 20]. The case raises serious questions about the conduct of Netezza executives, and the conduct of CIA’s clandestine war against senior jihadis in Afganistan and Pakistan.

The dispute surrounds a location analysis software package – “Geospatial” – developed by a small company called Intelligent Integration Systems (IISi), which like Netezza is based in Massachusetts. IISi alleges that Netezza misled the CIA by saying that it could deliver the software on its new hardware, to a tight deadline.

When the software firm then refused to rush the job, it’s claimed, Netezza illegally and hastily reverse-engineered IISi’s code to deliver a version that produced locations inaccurate by up to 13 metres [42 feet]. Despite knowing about the miscalculations, the CIA accepted the software, court submissions indicate.

This report comes on the heals of an earlier report which revealed that the military’s use of unencrypted communications channels in Iraq allowed militants to view live video images being transmitted by drones. As the Wall Street Journal reported in December:

Militants in Iraq have used $26 off-the-shelf software to intercept live video feeds from U.S. Predator drones, potentially providing them with information they need to evade or monitor U.S. military operations.

Senior defense and intelligence officials said Iranian-backed insurgents intercepted the video feeds by taking advantage of an unprotected communications link in some of the remotely flown planes’ systems. Shiite fighters in Iraq used software programs such as SkyGrabber — available for as little as $25.95 on the Internet — to regularly capture drone video feeds, according to a person familiar with reports on the matter.

Given that President Obama has authorized as many drone attacks since the end of March as his predecessor did in the previous four years, and given that in Pakistan there is a widespread belief that these attacks indiscriminately kill innocent people, and given that this perception is fueling a deepening hatred of America, one might imagine that revelations about the weaknesses of the drone program would result in a serious reexamination of its value.

On the contrary, the CIA is now intensifying its campaign of missile attacks and launched more drone strikes this month than at any time in the previous six years.

(For more background on the Geospatial story, see this report.)