If many Israelis thought the approach of the Mavi Marmara flotilla looked like an imminent attack by a Turkish armada, a British-flagged catamaran carrying nine Jewish activists on their way to Gaza surely posed no threat to the Jewish state — or did it? 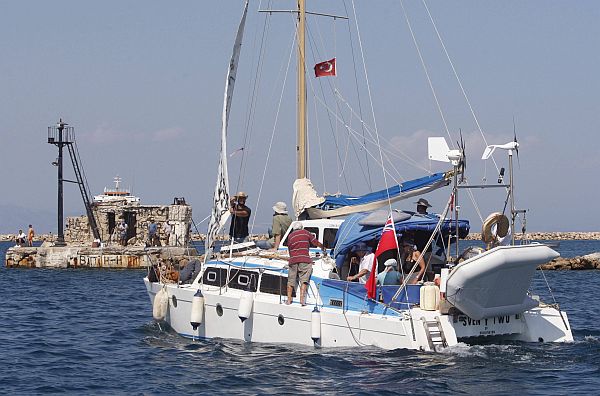 The IDF couldn’t take any chances and so as the Irene approached Gaza early today, Israeli commandos intercepted the latest waterborne menace and took over the boat, thankfully without killing anyone.

“The boarding of the yacht was without incident, and no violence of any kind was used by neither the passengers on board nor the Israel naval forces,” the IDF Spokesperson blog declared.

Israeli activist and former Israel Air Force pilot Yonatan Shapira saying that there were “no words to describe what we went through during the takeover.”

Shapira said the activists, who he said displayed no violence, were met with extreme IDF brutality, adding that the soldiers “just jumped us, and hit us. I was hit with a taser gun.”

“Some of the soldiers treated us atrociously,” Shapira said, adding that he felt there was a “huge gap between what the IDF spokesman is saying happened and what really happened.”

Meanwhile, Yossi Levy, an Israeli foreign ministry spokesman who has been carefully trained in the Avigdor Lieberman school of diplomacy encapsulated the government’s position in a string of insults.

The Foreign Ministry expressed its anger against the Israelis and Jews who took part in the sail. According to a ministry official, “They poured fuel into the bonfire of hatred against Israel worldwide. We don’t expect Israelis to be patriotic, but they should definitely not act as Hamas followers.”

The official criticized former pilot Yonatan Shapira and the Holocaust survivor who took part in the flotilla.

“This former pilot, who has joined the ranks of Hamas and sprays hateful graffiti [“Free Palestine“] on the walls of the Warsaw Ghetto, is not a pilot but an astronaut. A Holocaust survivor who sanctifies the name of the Jews’ murderers and takes time to justify those who don’t accept Israel’s right for sovereignty has probably not learned anything from the terrible past.”

Reuben Moscowitz begged to differ as he expressed disbelief that “Israeli soldiers would treat nine Jews this way. They just hit people.”

“I as a Holocaust survivor cannot live with the fact that the State of Israel is imprisoning an entire people behind fences,” Moscowitz said, adding that “it’s just immoral.”

“What happened to me in the Holocaust wakes me up every night and I hope we don’t do the same thing to our neighbors,” Moscowitz said, adding that he was comparing “what I went through during the Holocaust to what the besieged Palestinian children are going through.”