Is the word “terrorism” a secret terrorist weapon?

It appears that when US government officials try to think about terrorism their brains stop working. It’s a word that has become a piece of neural malware and everywhere it spreads, rational minds sputter and then cease to function. Who could have dreamed that a simple word could be so potent and destructive.

Yesterday we were told this: “The State Department alerts U.S. citizens to the potential for terrorist attacks in Europe.”

Why were they so specific, limiting the warning to just one continent? 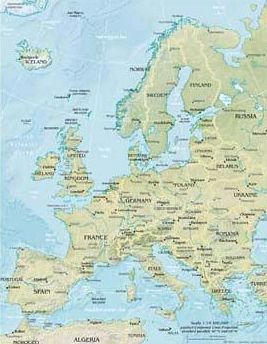 The State website usefully provides a map, just in case anyone isn’t sure where Europe is. Should Americans already there jump on the first plane to head home? Apparently not.

“U.S. citizens should take every precaution to be aware of their surroundings and to adopt appropriate safety measures to protect themselves when traveling.”

This might prevent a few road fatalities. Drivers in Europe do expect pedestrians to exercise caution in the vicinity of fast-moving traffic. It’s always a good idea not to step off the curb with your eyes shut.

The New York Times thought it would be good to get some expert opinion on the significance of the State travel alert. Georgetown University’s Bruce Hoffman said: “I’m not sure what it says, beyond the fact that the world’s a dangerous place, and we already knew that.” Indeed.

As to who prompted this response to the latest al Qaeda threat:

A White House spokesman, Nicholas S. Shapiro, said that while the State Department had decided to issue the alert, it came in response to Mr. Obama’s insistence that “we need to do everything possible to disrupt this plot and protect the American people.”

In terms of being able to identify where the next major act of terrorism may strike, the US government can’t be any more precise than to specify a continent — and with that level of precision who’s to say whether they identified the right continent.

At the same time, when it comes to identifying from where the next major act of terrorism will emanate, the US government claims it can identify targets with pinpoint accuracy as it escalates drone warfare in Pakistan.

Perhaps it’s not surprising that those who see danger everywhere also claim they have a talent for shooting straight.

There was a time — and it’s really not that long ago — that terrorism provoked a sturdier response from politicians who recognized that it was not their job to become agents of mass hysteria.

On October 12, 1984, Britain’s prime minister, Margaret Thatcher, survived an assassination attempt by the IRA. Five were killed and 31 injured in the blast which occurred at 2.54AM. Just over an hour later, having dusted herself off and changed her clothes, Thatcher spoke to the press.

“Life must go on as usual,” she said and went on to speak at the Conservative Party Conference which continued on schedule.

The event was recalled in Andrew Marr’s History of Modern Britain*:

The IRA responded with equal clarity:

Mrs. Thatcher will now realise that Britain cannot occupy our country and torture our prisoners and shoot our people in their own streets and get away with it. Today we were unlucky, but remember we only have to be lucky once. You will have to be lucky always. Give Ireland peace and there will be no more war.

Thatcher may have lacked the political flexibility and imagination required for the peace process, but she and the people of Northern Ireland and Britain demonstrated that life can indeed go on as usual even during a decades-long bombing campaign.

President Obama on the other hand seems willing to try and perpetuate the illusion that rests as the foundation of the war on terrorism: the idea that terrorism can be thwarted. It cannot.

The opportunities for individuals or small groups of individuals to cause carnage are infinite. The means to prevent such acts of violence are limited.

Political courage demands the articulation of this truth: the issue is not how you stop the unstoppable, but what you do afterwards.

Terrorism can provoke either intelligent or stupid responses and nothing is more stupid than an approach to counterterrorism which ends up fueling further acts of random violence.

The fact that 9/11 was followed by a decade of war with no end in sight is the grossest act of stupidity in modern history. Through its misconceived approach to counterterrorism America has rewarded al Qaeda more generously than Osama bin Laden could have ever dreamed.

*Marr’s entertaining BBC documentary series covers British history from the end of the Second World War onwards. The context for the clip above was Thatcher’s ruthless campaign against the National Union of Miners led by Arthur Scargill, but more broadly an effort to destroy the trade union movement and dismantle the welfare state. In the process, she deservedly became the most despised woman in Britain.

8 thoughts on “The terrorist threat to rational thinking”